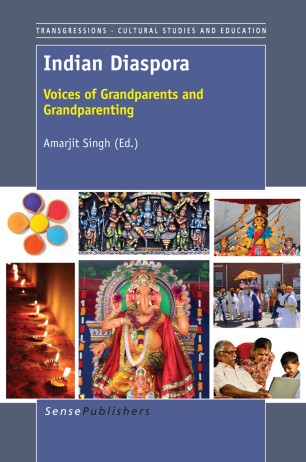 This book celebrates both the past and present existence of the Indian diasporic grandparents who live their daily lives in different countries – the United Kingdom, the United States, Canada, South Africa, Fiji, Mauritius, Australia, Suriname and Malaysia – and in different economic, social, cultural, religious contexts and specific household and family situations. The achievements of the few rich and the famous Indians living in diaspora have been given the celebratory treatment; similar status is not often given to the achievements of the diasporic Indian grandparents. However, “the vanquished and the victors, the subalterns and the sahibs, have equal claims on our attention … clearly there are areas where Indian communities have been settled for long periods of time … without having a significant effect on the countries of their residence … [but] they, too are integral parts of the diaspora” (Brij Lal, Peter Reeves & Rajesh Rai, 2006, p. 15). This book is about voices of contemporary Indian grandparents and their grand parenting practices. The diasporic Indian grandparents are engaged in keeping diverse “Indian families” and “communities” as strong as possible in the current era of globalization process and social policy initiatives that are dominated by the ideology of neo-liberalism. This book claims that the diasporic Indian grandparents have significant effects on the countries of their residence and too are integral parts of the Indian diaspora who deserve the celebratory treatment and status. The book can be used for courses in the areas of critical social work, family studies, gerontology, nursing, rural development, critical pedagogy, and diaspora studies.

“A veritable archive of stories, anecdotes, memories and reminiscences, of love, longing and search for a legacy, by diasporic Indian grandparents across the globe as they transgress boundaries in a socially porous world, negotiate generational differences complicated by the realities of modern living, cross cultures and seek to preserve connections between the past, the present and the future. A necessary contribution to the growing literature in the life of the Indian diaspora.”