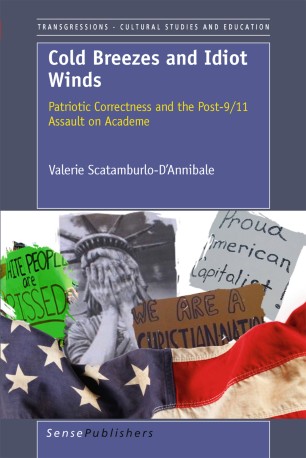 After 9/11, rightists capitalized on an atmosphere of fear and confusion to resuscitate the “culture wars” of the 1990s and once again targeted the academy. Using tactics reminiscent of the McCarthy era, religious firebrands, militant neoconservatives, and free market fundamentalists engaged in a concerted effort to silence voices critical of the ‘war on terror’ and liken legitimate dissent to treason. Brandishing a discourse of “patriotic correctness” (PC) that was informed by American ‘exceptionalism,’ Christian nationalism, anti-intellectualism, and virulent anti-liberalism, this coalition portrayed the professoriate as a dangerous cabal seeking the demise of ‘Western civilization.’ In Cold Breezes and Idiot Winds, Scatamburlo-D’Annibale explains why the most recent assault on academe must be understood in relation to the right’s broader offensive against liberalism. For decades, conservatives have worked diligently to construct a network of foundations, think tanks, and campus organizations dedicated to demonizing progressive thought, the legacy of the New Deal era, and the democratic social reforms of the 1960s. The author provides a detailed examination of this ideological infrastructure and how it advanced the agenda of PC post-9/11. She explores how the campaign for PC was aided and abetted by a right-wing media apparatus, how it continues to threaten academic freedom on campuses, and how it is currently infecting the larger body politic and contributing to the increased toxicity of the nation’s public dialogue. While purveyors of PC often invoke “culture war” rhetoric, Scatamburlo-D’Annibale adroitly reveals that their ultimate aim is to protect corporate power from any form of democratic accountability.