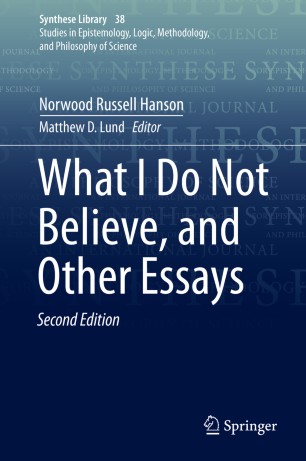 What I Do Not Believe, and Other Essays

Fifty years have passed since Norwood Russell Hanson's unexpected death, yet he remains an important voice in philosophy of science. This book is a revised and expanded edition of a collection of Hanson's essays originally published in 1971, edited by Stephen Toulmin and Harry Woolf. The new volume features a comprehensive introduction by Matthew Lund (Rowan University) and two new essays. The first is "Observation and Explanation: A Guide to Philosophy of Science", originally published as a posthumous book by Harper and Row. This essay, written near the end of Hanson’s life, represents his mature philosophy of science. The second new addition, Hanson's essay "The Trial of Galileo", is something of a "lost" work – it was only published in a small run collection on famous trials and was left out of the published lists of Hanson’s works. Ever the outspoken firebrand, Hanson found many lessons and warnings from Galileo's trial that were relevant to Cold War America.

This volume not only contains Hanson's best-known work in history and philosophy of science, but also highlights the breadth of his philosophical thought. Hanson balanced extreme versatility with a unified approach to conceptual and philosophical problems. Hanson's central insight is that philosophy and science both strive to render the world intelligible -- the various concepts central to our attempts to make sense of the world are interdependent, and cannot operate, or even be fully understood, independently. The essays included in this collection present Hanson's thinking on religious belief, theory, observation, meaning, cosmology, modality, logic, and philosophy of mind. This collection also includes Hanson's lectures on the theory of flight, Hanson's greatest passion.