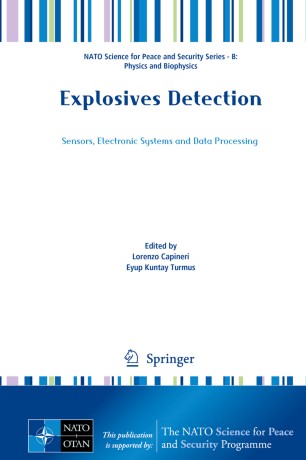 This volume presents selected contributions from the “Advanced Research Workshop on Explosives Detection” hosted by the Department of Information Engineering of the University of Florence, Italy in 2018. The main goal of the workshop was to find out how Science for Peace and Security projects in the field of Explosives Detection contribute to the development and/or refinement of scientific and technical knowledge and competencies. The findings of the workshop, presented in the last section of the book, determine future actions and direction of the SPS Programme in the field of explosives detection and management.The NATO Science for Peace and Security (SPS) Programme, promotes dialogue and practical cooperation between NATO member states and partner nations based on scientific research, technological innovation and knowledge exchange. Several initiatives were launched in the field of explosive detection and clearance, as part of NATO’s enhanced role in the international fight against terrorism. Experts and scientists from NATO members and partner countries have been brought together in multi-year projects, within the framework of the SPS Programme, to cooperate in the scientific research in explosive detection field, developing new technologies and methods to be implemented in order to detect explosive substances in different contexts.

Lorenzo Capineri was awarded his degree in electronic engineering in 1988, his doctorate in non-destructive Testing in 1993 and post-doctorate in 1994. In 1995 he became Associate Researcher and in 2004 Associate Professor of Electronics in the Department of Information Engineering. In 2017 he received the National Scientific Qualification as Full Professor in Electronics. His current research activities are in the design of ultrasonic guided waves devices, buried objects detection with ground penetrating radar and holographic radar. He has worked on several research projects in collaboration with national (Gilardoni spa) and international industries (National Semiconductors, Texas Instruments), and research institutions: the Italian Research Council (CNR), the Italian Space Agency (ASI) and the European Space Agency (ESA), AEA Technology and UKAEA (England), ISTC (International Science and Technology Centre) (Moscow, Russia), European Commission Joint Research Centre (Ispra)  and NATO (Brussels, Belgium). He is coauthor of 6 Italian patents and coauthor of 4 book chapters and about 200 scientific and technical papers. He is IEEE senior member since 2007 and member since 1983. Co-chair of IWAGPR2015 conference and member of scientific and technical committee of GPR, PIERS and IGARSS conferences. Fellow of Electromagnetic Academy and Fellow British Institute of Non Destructive Testing.

Eyüp Kuntay Turmuş is currently Advisor and Programme Manager in the Counter-Terrorism Section at the NATO Emerging Security Challenges Division. His main responsibility is the development and management of research and capacity-building activities for practical cooperation with NATO’s partners under the Science for Peace and Security (SPS) Programme. These activities address key priorities including counter terrorism, explosives management and defence against CBRN agents.

He joined NATO following a 12 year career in the defence industry sector. In this capacity, he managed major national and international armaments programmes, involving industry, universities and research organizations.