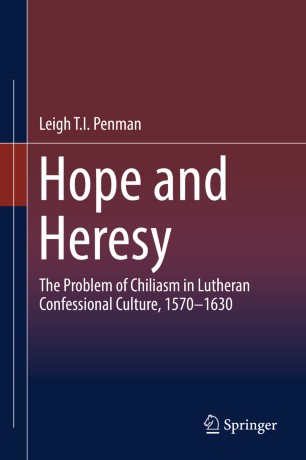 The Problem of Chiliasm in Lutheran Confessional Culture, 1570–1630

Apocalyptic expectations played a key role in defining the horizons of life and expectation in early modern Europe. Hope and Heresy investigates the problematic status of a particular kind of apocalyptic expectation—that of a future felicity on earth before the Last Judgement—within Lutheran confessional culture between approximately 1570 and 1630.

Among Lutherans expectations of a future felicity were often considered manifestations of a heresy called chiliasm, because they contravened the pessimistic apocalyptic outlook at the core of confessional identity. However, during the late sixteenth and early seventeenth centuries, individuals raised within Lutheran confessional culture—mathematicians, metallurgists, historians, astronomers, politicians, and even theologians—began to entertain and publicise hopes of a future earthly felicity. Their hopes were countered by accusations of heresy. The ensuing contestation of acceptable doctrine became a flashpoint for debate about the boundaries of confessional identity itself.

Based on a thorough study of largely neglected or overlooked print and manuscript sources, the present study examines these debates within their intellectual, social, cultural, and theological contexts. It outlines, for the first time, a heretofore overlooked debate about the limits and possibilities of eschatological thought in early modernity, and provides readers with a unique look at a formative time in the apocalyptic imagination of European culture.

Leigh T.I. Penman is a research fellow at the Institute for Advanced Studies in the Humanities at the University of Queensland, Australia.