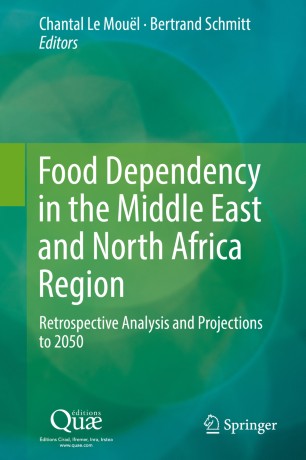 Food Dependency in the Middle East and North Africa Region

Retrospective Analysis and Projections to 2050

At present, 40% of the agri-food needs of the Middle-East and North Africa (MENA) region is covered by imports, whereas this figure was just about 10% in the beginning of the 1960’s. Demographic growth and diet change has combined to increase food demand while the region’s agricultural production grew rapidly but much less than demand. In this geopolitically complex region, agricultural imports and food policies represent an important share in state budgets and their actual level could curb development and the fight against poverty. In the future, even higher demographic growth and increased climate change could sensibly modify the region’s agricultural potentialities.
In this context, our study examines the agri-food future of this region in 2050. After a detailed retrospective analysis of past determinants, the impact of a simple extension of past tendencies was simulated. This central scenario, to which we added a reinforcement of climate change, was completed by several alternative scenarios inducing either an increase or a decrease of import dependency. Our results show that the region’s import dependency could accentuate and even become extreme in the Maghreb, the Middle-East and the Near-East. None of the examined levers could singularly limit this increase. Only a combination, which would require ambitious agricultural and food policies and their association to a world wide effort in climate change mitigation, would allow to maintain the import dependency of the MENA region at reasonable levels.