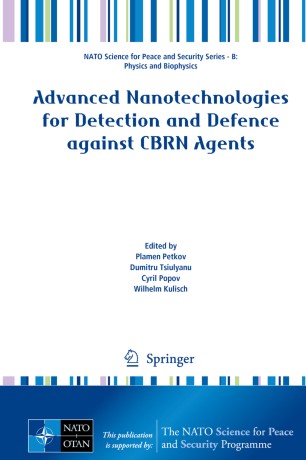 Advanced Nanotechnologies for Detection and Defence against CBRN Agents

This volume gives a broad overview of advanced technologies for detection and defence against chemical, biological, radiological and nuclear (CBRN) agents. It provides chapters addressing the preparation and characterization of different nanoscale materials (metals, oxides, glasses, polymers, carbon-based, etc.) and their applications in fields related to security and safety. In addition, it presents an interdisciplinary approach as the contributors come from different areas of research, such as physics, chemistry, engineering, materials science and biology. A major feature of the book is the combination of longer chapters introducing the basic knowledge on a certain topic, and shorter contributions highlighting specific applications in different security areas.

Plamen Petkov received his degree in Physics from the University of Chemical Technology and Metallurgy, Sofia, Bulgaria in 1981 and his PhD in Physics in 1994. He has worked at postdoc positions in I. Physicalisches Institut, RWTH, Aachen, Germany, University of Odense, Denmark, University of Bonn, Germany. Actually, he is a full professor of applied physics at the University of Chemical Technology and Metallurgy and head of Physics Department and Thin Film Technology Laboratory. His research activity is mainly devoted to electrical and optical properties of semiconductor materials for various technological applications. He is author of more than 150 archival refereed journal papers, co-author and co-editor of 5 books, 10 patents and inventions on topics of solid state physics.

Dumitru Tsiulyanu received his degree in Physics from the Institute of Applied Physics at the Moldavian Academy of Science (PhD in 1975 and DSc in 1988). Since 1989 he has worked at the Technical University of Moldova and since 1999 he is Head of the Physics Department and full professor in physics. Present scientific interests include investigations of basic physical properties of chalcogenides and their application development in instrumentation for environmental monitoring. His publication activity includes 150 archival refereed journal papers, co-authorship of 6 books, 20 patents and inventions on the topics of gas sensors and sensor systems.

Cyril Popov received his MSc in Chemical Engineering in 1990 and PhD in 1994 from the University of Chemical Technology and Metallurgy, Sofia, Bulgaria. In the period 1995-1997 he was a Postdoctoral Fellow at the National Institute of Advanced Industrial Science and Technology (AIST), Tsukuba, Japan and at the Central Laboratory of Photoprocesses, Bulgarian Academy of Sciences, Sofia, working on preparation and investigation of novel materials in the ternary system B-C-N. In 1998 he joined the Institute of Nanostructure Technologies and Analytics (INA), University of Kassel, Germany, where at the present he is a Group leader. His current research interests cover deposition, characterization and applications of nano- and ultrananocrystalline diamond films. He is co-author of more than 100 publications, 20 contributions to conference proceedings and 18 book chapters, co-editor of 4 books.

Wilhelm Kulisch studied Physics at the Universities of Münster and Kassel in Germany. Degrees: diploma, PhD and habilition. Since 1988 he works as Researcher and Teacher at the Institute of Nanotechnology (formely Microtechnology) and Analytics at the University of Kassel. His fields of research (among other) include semiconductor devices, thin film technology, superhard materials, diamond and nanodiamond, nanotechnology, biosensors. Between 2003 and 2009 he stayed four years at the NanoBioTech group at the Joint Research Center of the European Commission in Ispra, Italy. He is author of over 200 publications, ca. 10 textbooks and two monographies, editor of five books on diamond and sensors.