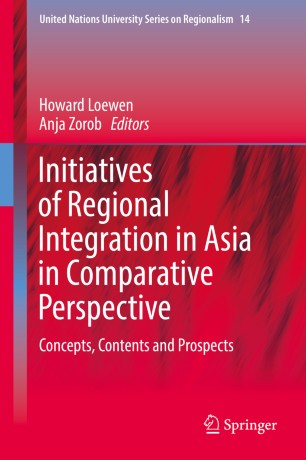 Initiatives of Regional Integration in Asia in Comparative Perspective

This volume offers to compare and explain variances of regionalism in Asia by disclosing the distinctive features of regional arrangements and how they evolved during the 1990s and 2000s against the background of a changing global environment. Moreover, it takes up a genuinely ‘inter-Asian’ perspective. By analysing and comparing diverse manifestations of regional integration agreements across Asia and its different sub-regions, it sets out to track their common characteristics and sub-regional facets with respect to their establishment, design and consequences. In addition, political processes accompanying their negotiation and implementation are scrutinized. The analysis encompasses nine case studies written by renowned scholars who together as a group combine an extraordinary mixture of different disciplinary backgrounds as well as expertise on shapes and processes of regional integration in different parts of Asia. The case studies seize on some of the most important features and controversial issues characterizing the second regionalism. Such are the emergence and impact of overlapping FTAs, regional financial and sub-regional economic integration and cooperation, power and the politics of regional integration as well as the nexus between conflict resolution, state failure and regional integration.

Anja Zorob (PhD) is member of the board of directors at the Centre for Mediterranean Studies (ZMS) at Ruhr-University Bochum (RUB), Germany, and heads the university-wide project “University without Borders” (RUB Administrative Department 2). Before joining “University without Borders”, she was a senior research fellow at the Institute of Development Research and Development Policy. She obtained her PhD in Contemporary Research on the Middle East (Major: Economics) from the University of Erlangen-Nuremberg in 2005. Her research interests cover Regional Economic Integration and MENA countries’ relations with external partners (esp. EU Mediterranean Policy with a focus on trade, development, migration) besides Socio-Economic Development in the Arab world. Anja Zorob is author of Syria and the Euro-Mediterranean Relationship (Lynne Rienner, 2008, with Jörg Michael Dostal) and editor of Arabellions: Zur Vielfalt von Protest und Revolte im Nahen Osten und Nordafrika (Springer VS, 2013, with Annette Jünemann). Other publications include Oman Caught Between the GCC Customs Union and Bilateral Free Trade with the US (Springer 2013, ed. by S. Wippel) and Intraregional Economic Integration: The Cases of GAFTA and MAFTA (Ashgate 2008, ed. by C. Harders & M. Legrenzi).

Howard Loewen is Visiting Full Professor of Political Science at the University of Erlangen-Nürnberg and Senior Research Fellow at the Institute for Peace Research and Security Policy at the University of Hamburg. His main research interests focus on the international relations and the international political economy of East Asia. He is specifically interested in regional trade, financial and maritime security regimes, their interplay with global institutions, regional political cooperation (ASEAN, ASEAN+3, East Asia Summit), interregionalism (EU-East Asia, USA-East Asia) and change and continuity in political systems such as the Philippines, Indonesia, Malaysia and Singapore. Before joining the University of Erlangen-Nuremberg in 2013, Dr. Loewen served as Associate Professor of International Relations and Director of Research in the School of Politics, History and International Relations at the University of Nottingham Malaysia Campus. He is the author of Theorie und Empirie transregionaler Kooperation am Beispiel des Asia-Europe Meeting (Verlag Dr. Kovac 2003), Das politische System der Philippinen. Eine Einführung (Springer VS 2017), and Die Internationalen Beziehungen Südostasiens (Springer VS 2017).