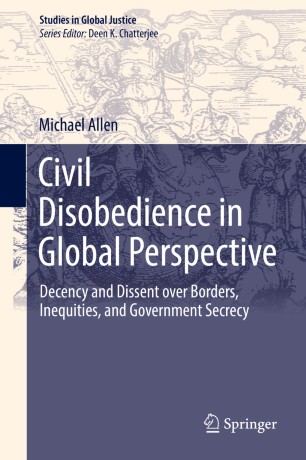 Decency and Dissent over Borders, Inequities, and Government Secrecy

This book explores a hitherto unexamined possibility of justifiable disobedience opened up by John Rawls’ Law of Peoples. This is the possibility of disobedience justified by appeal to standards of decency that are shared by peoples who do not otherwise share commitments to the same principles of justice, and whose societies are organized according to very different basic social institutions. Justified by appeal to shared decency standards, disobedience by diverse state and non-state actors indeed challenge injustices in the international system of states. The book considers three case studies: disobedience by the undocumented, disobedient challenges to global economic inequities, and the disobedient disclosure of government secrets. It proposes a substantial analytical redefinition of civil disobedience in a global perspective, identifying the creation of global solidarity relations as its goal.

Michael Allen breaks new ground in our understanding of global justice. Traditional views, such as those of Rawls, see justice as a matter of recognizing the moral status of all free and equal person as citizens in a state. Allen argues that this fails to see things from the global perspective. From this perspective disobedience is not merely a matter of social cooperation. Rather, it is a matter of self determination that guarantees the invulnerability of different types of persons and peoples to domination. This makes the disobedience by the undocumented justified, based on the idea that all persons are moral equals, so that all sovereign peoples need to reject dominating forms of social organization for all persons, and not just their own citizens. In an age of mass movements of people, Allen gives us a strong reason to change our practices in treating the undocumented.

This monograph is an important contribution to our thinking on civil disobedience and practices of dissent in a globalized world. This is an era where non-violent social movements have had a significant role in challenging the abuse of power in contexts as diverse, yet interrelated as the Arab Spring protests and the Occupy protests. Moreover, while protests such as these speak to a local political horizon, they also have a global footprint, catalyzing a transnational dialogue about global justice, political strategy and cosmopolitan solidarity. Speaking directly to such complexities, Allen makes a compelling case for a global perspective regarding civil disobedience. Anyone interested in how the dynamics of non-violent protest have shaped and reshaped the landscape for democratic engagement in a globalized world will find this book rewarding and insightful.

Michael Allen in an associate professor of Philosophy at East Tennessee State University. His research interests concern the intersection of resistance and legitimacy in global justice as well as in political animal ethics. He has published numerous journal articles in both of these areas.