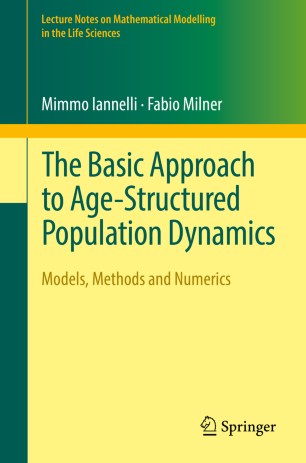 This book provides an introduction to age-structured population modeling which emphasises the connection between mathematical theory and underlying biological assumptions.
Through the rigorous development of the linear theory and the nonlinear theory alongside numerics, the authors explore classical equations that describe the dynamics of certain ecological systems. Modeling aspects are discussed to show how relevant problems in the fields of demography, ecology, and epidemiology can be formulated and treated within the theory. In particular, the book presents extensions of age-structured modelling to the spread of diseases and epidemics while also addressing the issue of regularity of solutions, the asymptotic behaviour of solutions, and numerical approximation. With sections on transmission models, non-autonomous models and global dynamics, this book fills a gap in the literature on theoretical population dynamics.
The Basic Approach to Age-Structured Population Dynamics will appeal to graduate students and researchers in mathematical biology, epidemiology and demography who are interested in the systematic presentation of relevant models and mathematical methods.

Mimmo Iannelli obtained his Laurea degree at the Istituto per le Applicazioni del Calcolo, Italy, in 1968. He was Full Professor at the University of Rome from 1976 to 1978. He then moved to the University of Trento, where he currently holds the title of Senior Professor. His research focuses on evolution equations and the analysis of mathematical methods in population theory. He has authored various publications on evolution equations and mathematical models of ecology and epidemiology, including three books.
Fabio Milner obtained the degree of Licenciado en Ciencias Matemáticas in Argentina in 1976 before moving to the USA in 1978. He obtained his PhD in Numerical Analysis in 1983 from the University of Chicago and joined the faculty of Purdue University immediately thereafter. He left Purdue in 2008 as Full Professor when he joined Arizona State University as Director of Mathematics for STEM Education. He shifted the focus of his research to mathematical biology after meeting Mimmo Iannelli in 1997. Milner is the author of numerous scientific publications, including 14 articles and one book that were co-authored by Mimmo Iannelli.