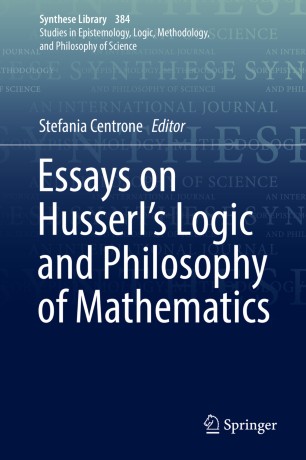 Essays on Husserl's Logic and Philosophy of Mathematics

Essays on Husserl’s Logic and Philosophy of Mathematics sets out to fill up a lacuna in the present research on Husserl by presenting a precise account of Husserl’s work in the field of logic, of the philosophy of logic and of the philosophy of mathematics. The aim is to provide an in-depth reconstruction and analysis of the discussion between Husserl and his most important interlocutors, and to clarify pivotal ideas of Husserl’s by considering their reception and elaboration by some of his disciples and followers, such as Oskar Becker and Jacob Klein, as well as their influence on some of the most significant logicians and mathematicians of the past century, such as Luitzen E. J. Brouwer, Rudolf Carnap, Kurt Gödel and Hermann Weyl. Most of the papers consider Husserl and another scholar – e.g. Leibniz, Kant, Bolzano, Brentano, Cantor, Frege – and trace out and contextualize lines of influence, points of contact, and points of disagreement. Each essay is written by an expert of the field, and the volume includes contributions both from the analytical tradition and from the phenomenological one.

Stefania Centrone is Privatdozent at the University of Hamburg. In 2012 she was awarded a DFG-Eigene Stelle for the project Bolzanos und Husserls Weiterentwicklung von Leibnizens Ideen zur Mathesis Universalis at the Carl von Ossietzky University of Oldenburg. She is author, among others, of the volumes Logic and philosophy of Mathematics in the Early Husserl (Springer 2010) and Studien zu Bolzano (Academia Verlag 2015).