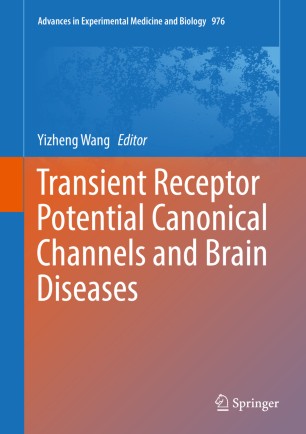 Part of the Advances in Experimental Medicine and Biology book series (AEMB, volume 976)

This book discusses the latest findings on the physiological and pathological functions of transient receptor potential canonical/classical (TRPC) proteins in the brain. In addition to reviewing the functions of TRPCs in brain development and neuron transmission, it mainly covers the potential roles of TRPCs in brain disorders. TRPC proteins belong to the TRP channel superfamily, which has around 30 members. Just like TRP channels, TRPCs are non-selectively permeable to cations, with a selectivity of calcium over sodium that varies among different members. The TRPC subfamily consists of six members, grouped on the basis of the similarities in gene sequence and protein structure in mammalians. What sets TRPCs apart from other subfamilies in TRPs is that their activation, stimulated by a membrane receptor-phospholipid C (PLC) cascade, contributes to the slow and sustained elevation of intracellular free calcium. Calcium ions, one of the most important types of second messengers, mediate a variety of physiological functions in the brain, including progenitor cell proliferation, dendritic formation, synaptic transmission and neuronal survival. All TRPCs except TRPC7 have been found in various regions of the brain, including the cerebrum, cerebellum, forebrain and hippocampus. This book provides students and investigators with comprehensive information on the regulation, function and potential of TRPCs and brain diseases in order to attract more attention to this field.