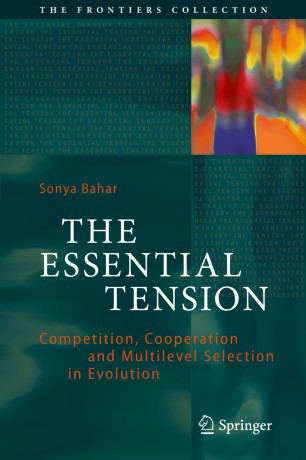 'The Essential Tension' explores how agents that naturally compete come to act together as a group. The author argues that the controversial concept of multilevel selection is essential to biological evolution, a proposition set to stimulate new debate.

The idea of one collective unit emerging from the cooperative interactions of its constituent (and mutually competitive) parts has its roots in the ancient world. More recently, it has illuminated studies of animal behavior, and played a controversial role in evolutionary biology.

In Part I, the author explores the historical development of the idea of a collectivity in biological systems, from early speculations on the sociology of human crowd behavior, through the mid-twentieth century debates over the role of group selection in evolution, to the notion of the selfish gene.

Part II investigates the balance between competition and cooperation in a range of contemporary biological problems, from flocking and swarming to experimental evolution and the evolution of multicellularity.

Part III addresses experimental studies of cooperation and competition, as well as controversial ideas such as the evolution of evolvability and Stephen Jay Gould’s suggestion that “spandrels” at one level of selection serve as possible sources of variability for the next higher level. Finally, building on the foundation established in the preceding chapters, the author arrives at a provocative new proposition: as a result of the essential tension between competition and cooperation, multiple levels may be essential in order for evolutionary processes to occur at all.

Sonya Bahar is Professor of Biophysics and Director of the Center for Neurodynamics at the University of Missouri at St Louis. She is an expert in evolutionary dynamics and neural synchronization. She is a recipient of the Presidential Early Career Award for Scientists and Engineers.