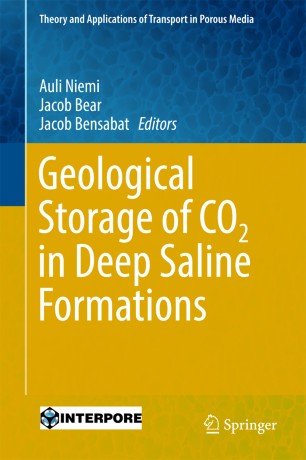 Part of the Theory and Applications of Transport in Porous Media book series (TATP, volume 29)

This book offers readers a comprehensive overview, and an in-depth understanding, of suitable methods for quantifying and characterizing saline aquifers for the geological storage of CO2. It begins with a general overview of the methodology and the processes that take place when CO2 is injected and stored in deep saline-water-containing formations. It subsequently presents mathematical and numerical models used for predicting the consequences of CO2 injection.

This book provides descriptions of relevant experimental methods, from laboratory experiments to field scale site characterization and techniques for monitoring spreading of the injected CO2 within the formation. Experiences from a number of important field injection projects are reviewed, as are those from CO2 natural analog sites. Lastly, the book presents relevant risk management methods.

Geological storage of CO2 is widely considered to be a key technology capable of substantially reducing the amount of CO2 released into the atmosphere, thereby reducing the negative impacts of such releases on the global climate. Around the world, projects are already in full swing, while others are now being initiated and executed to demonstrate the technology.

Auli Niemi is a Professor of Groundwater Modeling at the Department of Earth Sciences at Uppsala University, Sweden, where she leads geohydrology research.  Her earlier positions include e.g. Research Professor and Leading Research Scientist at Technical Research Centre of Finland, Visiting Professor at the Royal Institute of Technology, Stockholm and Research Associate at Lawrence Berkeley National Laboratory, USA. Her research involves the modeling and characterization of flow and transport in porous and fractured media, with a special interest in multiphase and coupled processes as well as characterizing heterogeneity effects. She has published over 140 journal articles and reports, and was the coordinator of the large-scale integrative EU FP7 project MUSTANG (2009-2014), which formed the basis for this book. She has also held key positions in other recent and ongoing EU FP7 projects on CO2 geological storage, including the TRUST and CO2QUEST (both 2012-2017) projects.

Jacob Bear is a Professor Emeritus at the Technion-Israel Institute of Technology, where he held the Albert and Anne Mansfield Chair in Water Resources as well as several administrative positions including Vice President for Academic Affairs. He was also the Dean of Engineering at the Kinneret Academic College in the Jordan Valley. Professor Bear is involved in research, consultancy and teaching in the area of groundwater flows, contaminant transport, and seawater intrusion in aquifers. He holds Honorary Doctorates from Delft University of Technology (1978) and from ETH Zurich (1988), and is a Fellow of the American Geophysical Union (AGU). His work has been published in five books and in over 200 articles. He was the founder of the International Journal on Transport in Porous Media, published by Springer, and served as its Editor (1985-2010).

Jacob Bensabat received his PhD in 1986 from the Technion-Israeli Institute of Technology. Following post-doctoral research at MIT, his main focus has been on geo-hydrological consultancy, particularly the analysis and modeling of large-scale hydrogeological problems, including groundwater resources management, pollution control, design of remediation schemes and analysis of seawater intrusion processes. He is presently leading a CO2 injection experiment at Heletz (Israel) as part of the MUSTANG project and TRUST projects. He is currently the coordinator of the EU-FP7 TRUST project (2012-2017).

“This book is more comprehensive and better balanced than preceding books on carbon storage (including my own). If carbon storage becomes a mainstream technology, then this book will become a classic and we can expect to see well-thumbed copies on the bookshelves of those charged with storing CO2 in deep saline formations.” (Prof. John Gluyas, GEOExPro, Vol. 14 (6), November, 2017)
Buy options