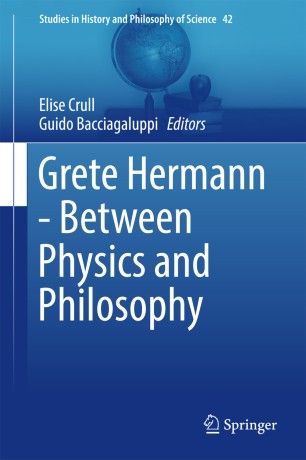 Grete Hermann - Between Physics and Philosophy

Part of the Studies in History and Philosophy of Science book series (AUST, volume 42)

This volume brings together recent scholarly contributions on Hermann by physicists, historians and philosophers of science, and philosophers and educators following in Hermann’s steps. Also included are translations of Hermann’s two most important essays, in the foundations of physics and in ethics. The former is here translated into English for the first time. Those interested in the many fields Hermann contributed to will find here a comprehensive discussion of her philosophy of physics that places it in the context of her wider work. Grete Hermann (1901-1984) was a pupil of mathematical physicist Emmy Noether, follower and co-worker of neo-Kantian philosopher Leonard Nelson, and an important intellectual figure in post-war German social democracy. She is also known for her work on the philosophy of modern physics in the 1930s, some of which emerged from intense discussions with Heisenberg and Weizsäcker in Leipzig. Hermann’s avowed aim was to counter the perceived threat to the Kantian notion of causality stemming from the new quantum mechanics. She not only succeeded to her satisfaction, but also discussed in depth the question of ‘hidden variables’ (including the first critique of von Neumann’s alleged impossibility proof) and provided an extensive analysis of Bohr’s notion of complementarity. Her work places her in the first rank among philosophers who wrote about modern physics in the first half of the last century.