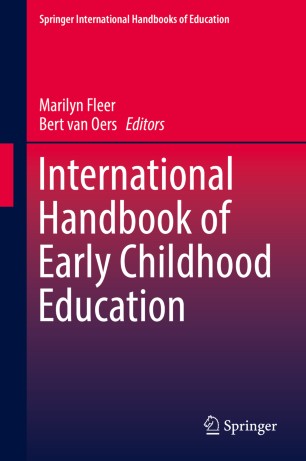 This international handbook gives a comprehensive overview of findings from longstanding and contemporary research, theory, and practices in early childhood education in the Northern and Southern hemispheres. The first volume of the handbook addresses theory, methodology, and the research activities and research needs of particular regions. The second volume examines in detail innovations and longstanding programs, curriculum and assessment, and conceptions and research into child, family and communities.
The two volumes of this handbook address the current theory, methodologies and research needs of specific countries and provide insight into existing global similarities in early childhood practices. By paying special attention to what is happening in the larger world contexts, the volumes provide a representative overview of early childhood education practices and research, and redress the current North-South imbalance of published work on the subject.

Marilyn Fleer: Torn between studying psychology and education as an undergraduate, Professor Marilyn Fleer ended up choosing early childhood education, a nascent field that straddled both her areas of interest. She hasn’t looked back since. As soon as she got into early childhood education she enjoyed it, Marilyn says. “I found it intellectually stimulating, and there’s plenty of scope for making a difference with my research.” She is now studying the early stages of concept formation – and how playtime can help promote children’s imagination, and the more ‘rational’ thinking later on as adults. “Imagination, creativity, and games are really important for development. Think of a child at home: they can take an ordinary stick, pretend that it’s a horse, and ‘ride’ on it. What they’ve done is change the meaning of the stick – they’ve used their imagination to think abstractly. It’s one step away from the same child turning the ‘stick’ into a ruler by measuring something with it at school. By using their imagination, they’ve learned to think more abstractly – and therefore become a more successful learner.” With the push for greater outcomes from very young children, particularly in literacy and numeracy, Marilyn’s field of research is gaining public and international interest.
Bert van Oers (PhD) is special professor of Cultural-historical Theory of Education at the Department of ‘Research and Theory in Education’ at VU University Amsterdam. He specialized in Cultural-historical activity theory since the 1970s and is now working at a CHAT-based theory of play and playful learning.  His major research interest focusses on the implementation of a play-based curriculum in primary school, and the elaboration and evaluation of Developmental Education. He published about this (among others) in B. van Oers (ed.), Developmental Education for young children. Springer, 2012.