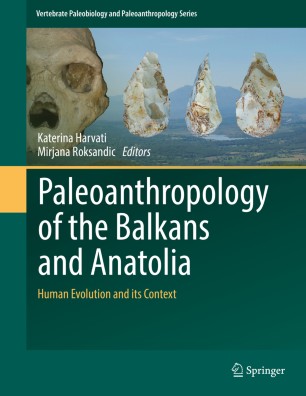 Paleoanthropology of the Balkans and Anatolia

Human Evolution and its Context

This edited volume systematically reviews the evidence for early human presence in one of the most relevant geographic regions of Europe - the Balkans and Anatolia, an area that has been crucial in shaping the course of human evolution in Europe, but whose paleoanthropological record is poorly known. The primary aim of this book is to showcase new paleoanthropological (human paleontological and paleolithic) research conducted in the region.
The volume is organized into three sections. The first one deals with the human fossil record from Greece, the Central Balkans, Croatia, Romania, Bulgaria and Turkey. The second section presents the paleolithic record of the same countries. In the third part, the authors provide a synthesis of current paleoenvironmental evidence for the Balkans. Chapters summarize and systematize the available human fossil evidence, examine their context, and place them within the framework of our understanding of human evolution in Europe and beyond, as well as present new analyses of existing human fossils. This book will be of interest to professionals, upper undergraduate and graduate students in paleoanthropology, human paleontology and paleolithic archaeology and in a variety of related fields, including human variation and adaptation, paleontology and biogeography. It will also be appropriate as a reference book for advanced undergraduate and graduate courses on human evolution and European paleoanthropology.

“The volume is a welcome contribution to the field of European Paleoanthropology. Several of the most success¬ful contributions are descriptive pieces that detail new ar¬cheological discoveries, which, as becomes increasingly ap¬parent when reading the volume, are sorely needed. In this context, I found Tourloukis’ observations on site distribu¬tions in basins particularly useful and I was pleased to see him acknowledge that landscape dynamics are integral to explaining site distributions of Paleolithic industries. The articles dealing with the Middle to Upper Paleolithic transi¬tion are also of excellent quality.” (Wei Chu, University of Cologne)
Buy options