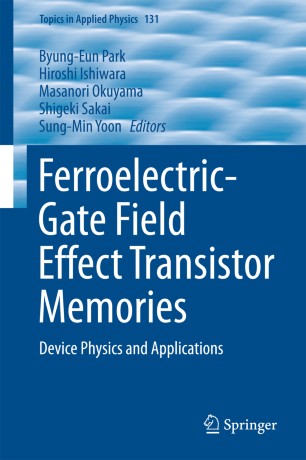 Among the various applications of ferroelectric thin films, the development of nonvolatile ferroelectric random access memory (FeRAM) has progressed most actively since the late 1980s and has achieved modest mass production levels for specific applications since 1995. There are two types of memory cells in ferroelectric nonvolatile memories. One is the capacitor-type FeRAM and the other is the field-effect transistor (FET)-type FeRAM. Although the FET-type FeRAM claims ultimate scalability and nondestructive readout characteristics, the capacitor-type FeRAMs have been the main interest for the major semiconductor memory companies, because the ferroelectric FET has fatal handicaps of cross-talk for random accessibility and short retention time.

This book aims to provide readers with the development history, technical issues, fabrication methodologies, and promising applications of FET-type ferroelectric memory devices, presenting a comprehensive review of past, present, and future technologies. The topics discussed will lead to further advances in large-area electronics implemented on glass or plastic substrates as well as in conventional Si electronics.

The book is composed of chapters written by leading researchers in ferroelectric materials and related device technologies, including oxide and organic ferroelectric thin films.

Byung-Eun Park received the B.S. and M.S. degrees from the University of Seoul, Korea, and the Ph.D. degree in applied engineering from the Tokyo Institute of Technology, Tokyo, Japan.
He is a professor at School of Electrical and Computer Engineering, University of Seoul, Korea. Prior to joining the University of Seoul in 2004, he was an assistant professor in Tokyo Institute of Technology, and had joined the R&D Association for Future Electron Devices, Japan. He has over 250 patents including pending. Now, he is a non-executive director of Korea Intellectual Property Strategy Institute and a member of Compensation Council for duty invention of Seoul Metropolitan Government. His research interests are device and process technologies in ferroelectric memories. He also interests display devices, solar cells and sensors.

Hiroshi Ishiwara was born in Japan in 1945. He received the B.S., M.S., and Ph.D. degrees in electronic engineering from Tokyo Institute of Technology, Tokyo, Japan, in 1968, 1970, and 1973, respectively.
He was with the Tokyo Institute of Technology, as Research Associate (1973-1976), Associate Professor (1976-1989), and Professor (1989-2011). In 2004 and 2005, he was the Dean of professor at Interdisciplinary Graduate School of Science and Engineering. He retired from Tokyo Institute of Technology in 2011 and he is now a Professor Emeritus. In the period from 2010 to 2013, he was a WCU (World Class University) Professor in Department of Physics, Konkuk University, Korea. His research interests are device and process technologies in integrated circuits, particularly in ferroelectric memories. He has published 450 peer-reviewed papers with total citations more than 6000.
Dr. Ishiwara was awarded the Japan IBM Science Prize in 1990, International Symposium on Integrated Ferroelectrics 2000 Honors, the Purple Ribbon Medal by Japanese Government in 2003, Certificate of Merit in Nano Research Innovation Category by Korean Deputy Prime Minister and Minister of Science & Technology in 2007, and SSDM (Solid State Devices and Materials) Award in 2008. He was the President of the Japan Society of Applied Physics (JSAP) in 2008 and 2009. He is fellows of IEEE (the Institute of Electrical and Electronics Engineers), MRS (Materials Research Society), IEICE (the Institute of Electronics, Information and Communication Engineers), and IEEJ (the Institute of Electrical Engineers of Japan), and an honorable member of JSAP.

Masanori Okuyama is a Professor Emeritus and a Specially Appointed Professor of Institute for NanoScience Design at Osaka University.  He has received the B. S., M. E. and D. E. degrees in electrical engineering from Osaka University, Japan in 1968, 1970 and 1973, respectively.  He was a researcher of Japan Society for the Promotion of Science from 1973 to 1974, a Research Associate, the Faculty of Engineering Science, Osaka University from 1974 to 1986, an Associate Professor from 1986 to 1991 and a Professor from 1991 to 2009.
His current interests are preparation and characterization of ferroelectric and dielectric thin films and their applications to electronic devices including nonvolatile memory, MOS structure, sensors and actuators. He is a President of The Society of Sensing Technology of Japan and a director of Japan Society of Next Generation Sensor Technology.  He was a director of The Institute of Electrical Engineers of Japan and a director of The Japan Society of Applied Physics from 2006 to 2007.
He is also an editor of Topics in Applied Physics Volumes 93 and 98, Springer.

Shigeki Sakai received the B.S. degree in electric engineering, and M.S. and Ph. D. degrees in electronic engineering from the University of Tokyo in1974, 1976, and 1979, respectively. He is now the Invited Senior Researcher in National Institute of Advanced Industrial Science and Technology (AIST), and is also Guest Professor of Kanazawa Institute of Technology. He was the leader of the Ferroelectric Memory Group at the Nanoelectronics Research Institute in AIST, and the project leader of the research program on "Research and Development of Ferroelectric-Flash-Memory Basic Technology" at the New Energy and Industrial Technology Development Organization (NEDO) in Japan. He was also Guest Professor of the University of Tsukuba. He is a member of The Japan Society of Applied Physics and The Institute of Electronics, Information and Communication Engineers.

Sung-Min Yoon received the B.S. in Department of Inorganic Material Engineering from Seoul National University, 1995. He received the M.S. and Ph.D. in Department of Applied Electronics from Tokyo Institute of Technology, 1997 and 2000, respectively. He was a Senior Research Engineer at ETRI from 2001 to 2011. He is currently an associate professor with Kyung Hee University. His research interests include the characterization of nonvolatile memory devices, device physics and process technologies for functional electronic devices, and oxide electronics.