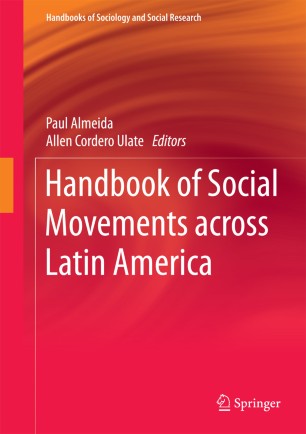 This handbook covers social movement activities in Latin American countries that have had profound consequences on the political culture of the region. It examines the developments of the past twenty years, such as a renewed upswing in popular mobilization, the ending of violent conflicts and military governments, new struggles and a relatively more democratic climate. It shows that, from southern Chiapas to Argentina, social movements in the 1990s, and especially in the 2000s, have reached new heights of popular participation. There is a lack of research on the politics of this region in the contemporary era of globalization, this volume partially fills the void and offers a rich resource to students, scholars, and the general public in terms of understanding the politics of mass mobilization in the early twenty-first century. The contributors each address social movement activity in their own nation, and together they present a multidisciplinary perspective on the topic. Each chapter uses a case study design to bring out the most prominent attributes of the particular social struggle(s), for instance the main protagonists in the campaigns, the grievances of the population, and the outcomes of the struggles. This Handbook is divided into seven substantive themes, providing overall coherence to a broad range of social conflicts across countries, issues, and social groups. These themes include: 1) theory of Latin American social movements; 2) neoliberalism; 3) indigenous struggles; 4) women’s movements; 5) movements and the State; 6) environmental movements; and 7) transnational mobilizations. ​

Paul Almeida is a Professor of Sociology at the University of California, Merced. His research centers on social movements. Almeida’s articles have appeared in the American Journal of Sociology, Mobilization, Social Forces, Social Problems, and other scholarly outlets. He is author of Mobilizing Democracy: Globalization and Citizen Protest (Johns Hopkins University Press, 2014); Waves of Protest: Popular Struggle in El Salvador, 1925-2005 (University of Minnesota Press 2008) and co-editor with Hank Johnston of Latin American Social Movements: Globalization, Democratization and Transnational Networks (Rowman & Littlefield 2006). His research has been funded by the World Society Foundation and the Fulbright Scholars Program. Almeida serves on the editorial advisory boards of Anuario de Estudios Centroamericanos, Latin American Perspectives, Mobilization, Research in Political Sociology, Social Forces, and Sociology of Development. He is a Council member for the Global and Transnational Sociology section and Chair-Elect of the section on the Political Economy of the World System (PEWS) of the American Sociological Association.

Allen Cordero Ulate was born in Tres Ríos, Costa Rica. He attended the University of Costa Rica and studied sociology in the mid 1970s. He participated in diverse social movements as well as the resistance against the Somoza dictatorship in Nicaragua between 1978 and 1979. Since 1993 he has worked as a professor and researcher at FLACSO-Costa Rica. In 2003, he earned his doctorate in Philosophy from the University of Costa Rica. Since 2005, he has served as a professor in Sociology at the University of Costa Rica teaching graduate and undergraduate courses in Social Movements and Research Methods. Dr. Cordero has also held a visiting Professorship at the Institut des Hautes Etudes de l’Amérique Latine (IHEAL) de París 3, Sorbonne Nouvelle. In the field of social movements his research focuses on environmental, indigenous, and peasant movements. He is the author of several articles and books, including: Nuevos ejes de acumulación y naturaleza: el caso del turismo (CLACSO 2006) and El Paradigma Inconcluso. Kuhn y la Sociología en América Latina (FLACSO Guatemala 2008 and EUCR, 2011).