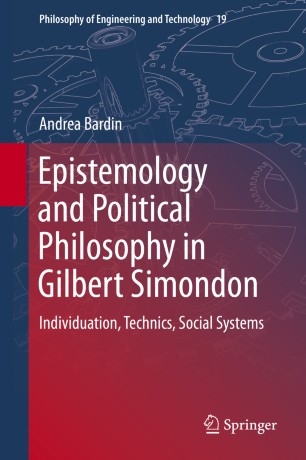 Part of the Philosophy of Engineering and Technology book series (POET, volume 19)

This combination of historiography and theory offers the growing Anglophone readership interested in the ideas of Gilbert Simondon a thorough and unprecedented survey of the French philosopher’s entire oeuvre. The publication, which breaks new ground in its thoroughness and breadth of analysis, systematically traces the interconnections between Simondon’s philosophy of science and technology on the one hand, and his political philosophy on the other.

The author sets Simondon’s ideas in the context of the epistemology of the late 1950s and the 1960s in France, the milieu that shaped a generation of key French thinkers such as Deleuze, Foucault and Derrida. This volume explores Simondon’s sources, which were as eclectic as they were influential: from the philosophy of Bergson to the cybernetics of Wiener, from the phenomenology of Merleau-Ponty to the epistemology of Canguilhem, and from Bachelard’s philosophy of science to the positivist sociology and anthropology of luminaries such as Durkheim and Leroi-Gourhan. It also tackles aspects of Simondon’s philosophy that relate to Heidegger and Elull in their concern with the ontological relationship between technology and society, and discusses key scholars of Simondon such as Barthélémy, Combes, Stiegler, and Virno, as well as the work of contemporary protagonists in the philosophical debate on the relevance of technique. The author’s intimate knowledge of Simondon’s language allows him to resolve many of t

he semantic errors and misinterpretations that have plagued reactions to Simondon’s many philosophical neologisms, often drawn from his scientific studies.