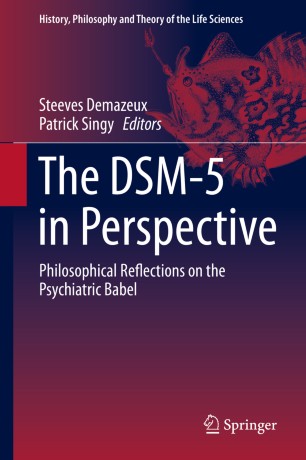 The DSM-5 in Perspective

Philosophical Reflections on the Psychiatric Babel

Part of the History, Philosophy and Theory of the Life Sciences book series (HPTL, volume 10)

Since its third edition in 1980, the Diagnostic and Statistical Manual of Mental Disorders (DSM) of the American Psychiatric Association has acquired a hegemonic role in the health care professions and has had a broad impact on the lay public. The publication in May 2013 of its fifth edition, the DSM-5, marked the latest milestone in the history of the DSM and of American psychiatry. In The DSM-5 in Perspective: Philosophical Reflections on the Psychiatric Babel, experts in the philosophy of psychiatry propose original essays that explore the main issues related to the DSM-5, such as the still weak validity and reliability of the classification, the scientific status of its revision process, the several cultural, gender, and sexist biases that are apparent in the criteria, the comorbidity issue, and the categorical vs. dimensional debate.

For several decades the DSM has been nicknamed “The Psychiatric Bible.” This volume would like to suggest another biblical metaphor: the Tower of Babel. Altogether, the essays in this volume describe the DSM as an imperfect and unachievable monument – a monument that was originally built to celebrate the new unity of clinical psychiatric discourse, but that ended up creating, as a result of its hubris, ever more profound practical divisions and theoretical difficulties.