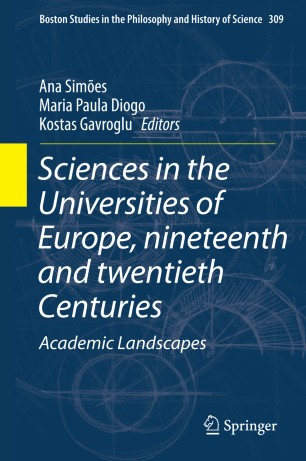 Sciences in the Universities of Europe, Nineteenth and Twentieth Centuries

Part of the Boston Studies in the Philosophy and History of Science book series (BSPS, volume 309)

This book focuses on sciences in the universities of Europe in the nineteenth and twentieth centuries, and the chapters in it provide an overview, mostly from the point of view of the history of science, of the different ways universities dealt with the institutionalization of science teaching and research. A useful book for understanding the deep changes that universities were undergoing in the last years of the 20th century. The book is organized around four central themes: 1) Universities in the longue durée; 2) Universities in diverse political contexts; 3) Universities and academic research; 4) Universities and discipline formation. The book is addressed at a broad readership which includes scholars and researchers in the field of General History, Cultural History, History of Universities, History of Education, History of Science and Technology, Science Policy, high school teachers, undergraduate and graduate students of sciences and humanities, and the general interested public.

Ana Simões is associate professor of history of science at the Faculty of Sciences, University of Lisbon, Portugal, and head of the Center for the History of Science and Technology (CIUHCT). Her research interests include the history of quantum chemistry, and history of science in the European Periphery, with emphasis on science in Portugal (popularization of science, science in the news, science and politics, and science and the universities). She is a founding member of the international group STEP and of the journal HoST. She authored and edited more than 100 publications, participates in research projects and networks, and regularly organizes meetings, both nationally and internationally.

Maria Paula Diogo is Full Professor of History of Technology at the Faculty of Science and Technology, New University of Lisbon (FCT/NOVA), Portugal, and member of the Interuniversitary Centre for the History of Science and Technology (CIUHCT). She has pioneered the studies on Portuguese engineering and engineers in the early 90s, and she is currently working on engineering and the Portuguese colonial agenda and on the role of technology in European history. She publishes, coordinates and participates in research projects, and organizes meetings on a regular basis both nationally and internationally. She is a member of several societies and international research networks.

Kostas Gavroglu is professor of history of science at the Department of History and Philosophy of Science at the University of Athens. He is currently co-editor of the series in history and philosophy of science by Springer Publishers, editor of the series in history of science by Crete University Publishers and a member of the editorial boards of HYLE, Foundations of Chemistry and Perspectives in Physics. His latest books are Neither Physics nor Chemistry (MIT Press, second printing 2014) with Ana Simões and The History of the University of Athens 1837-1937 (in Greek, by Crete University Press 2014) with V.Karamanolakis and Ch. Barkoula, and the edited volume The History of Artificial Cold: Scientific, Technological, Social and Cultural Aspects (Springer Publishers, 2013).