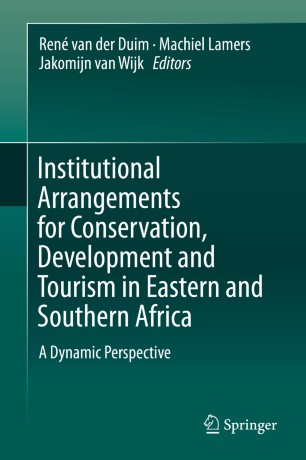 Institutional Arrangements for Conservation, Development and Tourism in Eastern and Southern Africa

This book describes and analyzes six novel conservation arrangements in eastern and southern Africa, illustrating how tourism is increasingly used and promoted as a key mechanism for achieving conservation and development objectives outside state-protected areas.

Chapter 2 analyzes the emergence of conservancies in Namibia, comparing the promise and risks of different models of community involvement in tourism. Chapter 3 explores the conservancy approach in practice, using the example of the Tsiseb Conservancy to show the origins of conservancies, their function and organization. Chapters 4 and 5 discuss the mixed results of Community Based Natural Resource Management (CBNRM) in Botswana, including a case study of the Chobe Enclave Conservation Trust that shows how operational, structural and cultural limits impede community empowerment there. Chapter 6 examines sport hunting, including private game reserves in South Africa, which now number some 11,600, and which have led to a 40-fold increase in wildlife numbers over 5 decades. Chapter 7 offers a more critical perspective on South African wildlife conservation, presenting the case of a proposed ‘heritage park’ that the authors say excludes an impoverished local majority while securing access for a privileged minority. Chapter 8 questions to what extent the reintroduction of sport hunting in Uganda is an appropriate instrument for addressing conservation and livelihood challenges around protected areas.  Chapters 9 and 10 discuss the development of transfrontier conservation areas (TFCAs) in sub-Saharan Africa. Chapter 9 describes the evolution, and benefits and challenges of TFCAs. Chapter 10 empirically illustrates the development of TFCAs  with a study of the Selous-Niassa TFCA. Chapters 11 and 12 give a detailed account of the institutional arrangement of tourism conservation enterprises (TCEs). Chapter 11 describes the emergence of this organizational form and its key features, whereas Chapter 12 discusses the actual performance of three TCEs in Kenya.

The concluding chapter presents a comparative analysis of all the arrangements surveyed in the book, tracing their path of development from ‘fortress’ type conservation toward principles of community-based natural resource management and the use of tourism to address conservation challenges outside national parks. The authors argue that these conservation arrangements have secured large amounts of land, but that governance challenges and disputes over sharing the tourist dollars affect their ability to produce enduring socioeconomic and conservation benefits. Finally, they explore the prospects of transformation in these arrangements in decades to come and propose a research agenda for examining such dynamics.