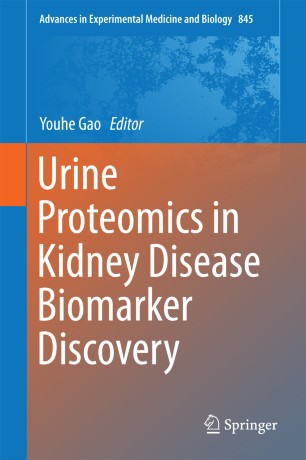 Part of the Advances in Experimental Medicine and Biology book series (AEMB, volume 845)

This book systematically summarizes the ideas and technologies used in urine proteome analysis. It argues that change is the core of biomarker definition since the body uses its homeostatic mechanisms to correct changes in the blood. This means that urine is probably a better source of biomarkers than blood. A roadmap to the urinary biomarker era is proposed, and researchers are reminded of the potential opportunities and risks in their study design. Kidney diseases are emphasized as they produce the most significant changes in urine. This book tries to show researchers and graduate students, who are in or entering the field, "all things considered" rather than "the current affair".

Youhe Gao is a professor from Department of Physiology and Pathophysiology, Institute of Basic Medical Sciences, Chinese Academy of Medical Sciences. He is the member of the standing committee of the proteomics branch of the Chinese Society of Biochemistry and Molecular Biology. He was awarded the National Science Fund for Distinguished Young Scientists in 2007. His research is focused on human urine proteomics and its application, cell secretome and biological predication of protein-protein interaction.