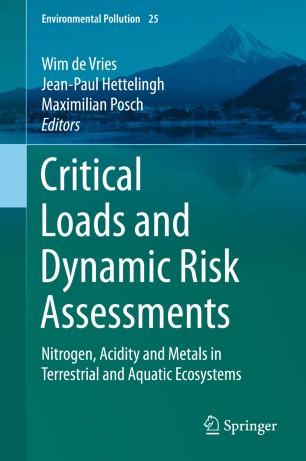 Nitrogen, Acidity and Metals in Terrestrial and Aquatic Ecosystems

This book provides a unique overview of research methods over the past 25 years assessing critical loads and temporal effects of the deposition of air pollutants. It includes critical load methods and applications addressing acidification, eutrophication and heavy metal pollution of terrestrial and aquatic ecosystems. Applications include examples for each air pollution threat, both at local and regional scale, including Europe, Asia, Canada and the US. The book starts with background information on the effects of the deposition of sulphur, nitrogen and heavy metals and geochemical and biological indicators for risk assessments. The use of those indicators is then illustrated in the assessment of critical loads and their exceedances and in the temporal assessment of air pollution risks. It also includes the most recent developments of assessing critical loads and current and future risks of soil and water chemistry and biodiversity under climate change, with a special focus on nitrogen. The book thus provides a complete overview of the knowledge that is currently used for the scientific support of policies in the field of air pollution control to protect ecosystem services.

Wim de Vries holds a Ph.D. in Soil Chemistry and worked from 1983–88 at the Netherlands Soil Survey Institute on the accumulation and leaching of nutrients, aluminium and acidity in soils in response to changed inputs. From 1989–1999 he worked at the DLO-Winand Staring Centre, mainly concentrating on critical loads of nitrogen and acidity in view of effects on soil and soil solution chemistry, growth, vitality and species diversity of terrestrial ecosystems. Since 2000, he is a senior research scientist at Alterra, part of Wageningen University and Research Centre. Wim de Vries is also professor at the Environmental Systems Analysis Group of Wageningen University where he holds the chair "Integrated nitrogen impact modelling”. His research is organized around impacts of the changes in land use, air quality and climate change on ecosystem services and the environment. This includes impacts on productivity and carbon sequestration of terrestrial ecosystems, greenhouse gas emissions, plant species diversity and soil and water quality.

Jean-Paul Hettelingh holds a Ph.D. in economics. He has held research positions at the Free University (Amsterdam) from 1978-1985, at the International Institute of Applied Systems Analysis (IIASA-Austria) from 1986-1989. He was professor in environmetrics at the University of Leiden from 1997-2002. Since 1990 he directs the Coordination Centre for Effects (CCE) located at RIVM. The CCE is a program centre under the Convention on Long-range Transboundary Air Pollution focussing on the development of effect-based modelling methods and data. The CCE also participates in consortia funded by the European Union. He has extensive experience with the analysis of environmental systems in general and of effects of air pollution in particular. He is co-author of environmental impact modules of integrated assessment models of air pollution in Europe (RAINS) and Asia (RAINS-Asia). He conducts the development and policy application of methodologies for the computation and use of critical thresholds for air pollution effects in Europe.

Maximilian Posch holds a Ph.D. in Physics and a Masters degree in Mathematics from the Technical University of Vienna and worked from 1981–89 at the International Institute for Applied Systems Analysis (IIASA) in Laxenburg (Austria) on the integrated assessment of acidification in Europe (the RAINS/GAINS model). From 1990–1994 he worked at the Finnish Water and Environment Research Institute in Helsinki on the environmental impacts of acid deposition and agricultural practices. Since 1995 he is senior researcher at the Coordination Centre for Effects (CCE) at the Dutch National Institute for Public Health and the Environment (RIVM). His research concentrates on modelling the effects of air pollution on terrestrial and aquatic ecosystems and the transfer of that knowledge to policy making.