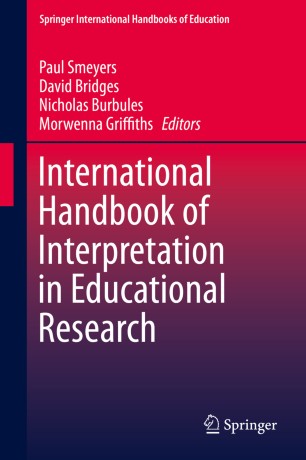 This handbook focuses on the often neglected dimension of interpretation in educational research. It argues that all educational research is in some sense ‘interpretive’, and that understanding this issue belies some usual dualisms of thought and practice, such as the sharp dichotomy between ‘qualitative’ and ‘quantitative’ research. Interpretation extends from the very framing of the research task, through the sources which constitute the data, the process of their recording, representation and analysis, to the way in which the research is finally or provisionally presented. The thesis of the handbook is that interpretation cuts across the fields (both philosophically, organizationally and methodologically).

By covering a comprehensive range of research approaches and methodologies, the handbook gives (early career) researchers what they need to know in order to decide what particular methods can offer for various educational research contexts/fields. An extensive overview includes concrete examples of different kinds of research (not limited for example to ‘teaching’ and ‘learning’ examples as present in the Anglo-Saxon tradition, but including as well what in the German Continental tradition is labelled ‘pädagogisch’, examples from child rearing and other contexts of non-formal education) with full description and explanation of why these were chosen in particular circumstances and reflection on the wisdom or otherwise of the choice – combined in each case with consideration of the role of interpretation in the process.

The handbook includes examples of a large number of methods traditionally classified as qualitative, interpretive and quantitative used across the area of the study of education. Examples are drawn from across the globe, thus exemplifying the different ‘opportunities and constraints’ that educational research has to confront in different societies.

David Bridges is Director of Research (Kazakhstan and Mongolia) in the University of Cambridge Faculty of Education, Emeritus Fellow of St Edmunds and Homerton Colleges and Emeritus Professor in the University of East Anglia, where he was formerly Dean of the School of Education and then Pro Vice Chancellor. He has recently served as Director of the Von Hugel Institute and Director of the Association of Universities in the East of England. Originally a historian, he has a distinguished record of contributions to philosophy of education and is an Honorary Vice President of the Philosophy of Education Society of Great Britain, but he has also directed or co-directed some thirty empirically based research and evaluation projects. He was a Council member of both the British and European Educational Research Associations, is an elected Academician of the (UK) Academy of Social Sciences and of the Lithuanian Academy of Science and holds an Honorary Doctorate of the Open University. He has been Visiting Professor in the universities of Hong Kong, Oslo, Trondheim, Chung Cheng, Addis Ababa and Kaunas Technology University. David Bridges’ has published over 150 journal articles, chapters and authored, edited, and co-edited books that include: ’Fiction written under oath’? Essays in philosophy and educational research; ‘Evidence-based educational policy’: What evidence? What basis? Whose policy?,; Philosophy and methodology of educational research; Higher education and national development; Education, autonomy and democratic citizenship; Education, democracy and discussion; and Educational reform and internationalisation: the case of school reform in Kazakhstan.

Nicholas C. Burbules is the Gutgsell Professor in the Department of Educational Policy, Organization and Leadership at the University of Illinois, Urbana-Champaign. His primary research focuses on philosophy of education; teaching though dialogue; and technology and education. His current philosophical work focuses primarily on the idea of “situated” philosophy of education, a way of reframing the question of whether philosophy of education is merely a derivative branch of pure philosophy or an “applied” field. Situated philosophy of education begins with real cases and problems and derives philosophical questions from them, rather than beginning with philosophical problems and then using educational cases as examples or illustrations. He is also continuing to work on the topic of dialogue and communicative virtues. His current work on technology emphasizes the topic of ubiquitous learning, the study of new models of “anywhere, anytime” teaching and learning arising from the proliferation of mobile technologies and pervasive wireless connectivity. He has published several papers and given numerous talks on the topic. He is currently the Education Director for the National Center on Professional and Research Ethics, located at Illinois. His most recent books are Showing and Doing: Wittgenstein as a Pedagogical Philosopher, coauthored with Michael Peters and Paul Smeyers (2010, Paradigm Press) and Feminisms and Educational Research, coauthored with Wendy Kohli (2012, Rowman and Littlefield).

Morwenna Griffiths is the Chair of Classroom Learning in the Moray House School of Education at Edinburgh University. She has taught in primary schools in Bristol, and at the University of Isfahan, Iran, at Christ Church College HE in Canterbury, and at Oxford Brookes, Nottingham and Nottingham Trent Universities. Her recent research has included philosophical theorising and empirical investigation, related to social justice, the nature of practice, pedagogy, the feminisation of teaching and creativity. Her books include Action for Social Justice in Education: Fairly Different; Educational Research for Social Justice, and Feminisms and the Self; the Web of Identity. She has contributed chapters on social justice and educational research methods to International Handbooks in a range of research areas: International Handbook of Educational Leadership and Social (In)Justice, (eds.) Ira Bogotch and Carolyn M. Shields 2013, Routledge Companion to Research in the Arts Routledge, (eds.) Biggs, M. and Karlsson, H. 2010,  Handbook of Educational Action Research, (eds.) Bridget Somekh and Susan Noffke 2009 and International Handbook of Self-Study of Teaching and Teacher Education Practices, (eds.) J. Loughran, M.L. Hamilton, V. LaBoskey and T. Russell. Her other publications include quantitative studies of computers in schools, action research, self-study, research evaluations based on interview data. Her current interests are related to a concern about how to be and to act justly in a world which is constituted of relationships with our natural world that includes but also exceeds human beings.