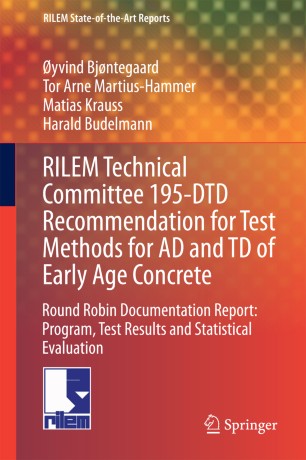 This report presents the Round-Robin (RR) program and test results including a statistical evaluation of the RILEM TC195-DTD committee named “Recommendation for test methods for autogenous deformation (AD) and thermal dilation (TD) of early age concrete”. The task of the committee was to investigate the linear test set-up for AD and TD measurements (Dilation Rigs) in the period from setting to the end of the hardening phase some weeks after. These are the stress-inducing deformations in a hardening concrete structure subjected to restraint conditions.
The main task was to carry out an RR program on testing of AD of one concrete at 20 °C isothermal conditions in Dilation Rigs. The concrete part materials were distributed to 10 laboratories (Canada, Denmark, France, Germany, Japan, The Netherlands, Norway, Sweden and USA), and in total 30 tests on AD were carried out. Some supporting tests were also performed, as well as a smaller RR on cement paste. The committee has worked out a test procedure recommendation which is reported separately and submitted acceptance as a RILEM method.