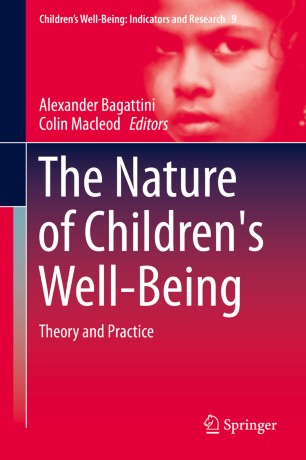 The Nature of Children's Well-Being

This book presents new findings that deal with different facets of the well-being of children and their relevance to the proper treatment of children. The well-being of children is considered against the background of a wide variety of legal, political, medical, educational and familial perspectives. The book addresses diverse issues from a range of disciplinary perspectives using a variety of methods. It has three major sections with the essays in each section loosely organized about a common general theme. The first section focuses on issues concerning the relation between children’s well-being and autonomy or agency. The second section deals with child well-being insofar as the limits of parental authority are concerned. The third section has a more applied orientation and addresses a variety of public policy controversies involving the interpretation of children’s well-being.

Alexander Bagattini is assistant professor in Philosophy at the University of Düsseldorf. His areas of research and teaching are in the ethical implications of the concept of child well-being, children’s rights, philosophy of education and environmental ethics. He is also principal investigator in the interdisciplinary research project “Child Well-Being as a Collective Interpretive Pattern” which is funded by the BMBF (German Federal Ministry for Education and Research / Bundesministerium für Bildung und Forschung).

Colin M. Macleod is Associate Professor of Philosophy and Law at the University of Victoria, Canada. His research focuses on issues in contemporary moral, political and legal theory, with a special focus on distributive justice and equality; children, families and justice and democratic ethics. He is the author of Liberalism, Justice and Markets (Oxford University Press, 1998) and the editor of Justice and Equality (University of Calgary Press, 2012) and (with David Archard) of The Moral and Political Status of Children (Oxford University Press, 2002).