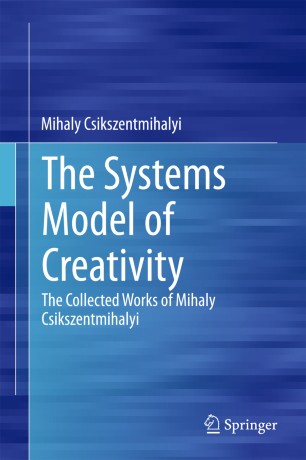 The Systems Model of Creativity

The Collected Works of Mihaly Csikszentmihalyi

This first volume of the Collected Works of Mihaly Csikszentmihalyi represents his work on Art and Creativity. Starting with his seminal 1964 study on creativity up to his 2010 publication in Newsweek, the volume spans over four decades of research and writing, and clearly shows Csikszentmihalyi’s own development as an academic, psychologist, researcher and person. Unconventional and unorthodox in his approach, Csikszentmihalyi chose the topic of creativity as a field of study believing it would help him be a better psychologist and advance his understanding of how to live a better life.

The chapters in this volume trace the history of the study of creativity back to the days of Guilford and research on IQ and Jacob Getzels’ work on creativity and intelligence. Firmly grounded in that history, yet extending it in new directions, Mihaly Csikszentmihalyi started his life-long study on artistic creativity. His first extensive study at the School of the Art Institute of Chicago enabled him to observe, test and interview fine art students drawing in a studio. The study formed the very basis of all his work on the subject, and has resulted in several articles, represented in this volume, on such creativity-related concepts as problem solving versus problem finding, the personality of the artist, the influence of the social context, creativity as a social construction, developmental issues, and flow. The main contribution to the topic of creativity, and also the main concept explored in this volume, is the Systems Model of Creativity. Seven chapters in this volume discuss the development of this conceptual model and theory.

A Hungarian psychology professor, who emigrated to the United States at the age of 22. Now at Claremont Graduate University, he is the former head of the department of psychology at the University of Chicago and of the department of sociology and anthropology at Lake Forest College. He is noted for both his work in the study of happiness and creativity and also for his notoriously difficult name, in terms of pronunciation for non-native speakers of the Hungarian language, but is best known as the architect of the notion of flow and for his years of research and writing on the topic. He is the author of many books and over 120 articles or book chapters. Martin Seligman, former president of the American Psychological Association, described Csikszentmihalyi as the world's leading researcher on positive psychology. Csikszentmihalyi once said "Repression is not the way to virtue. When people restrain themselves out of fear, their lives are by necessity diminished. Only through freely chosen discipline can life be enjoyed and still kept within the bounds of reason." His works are influential and are widely cited.