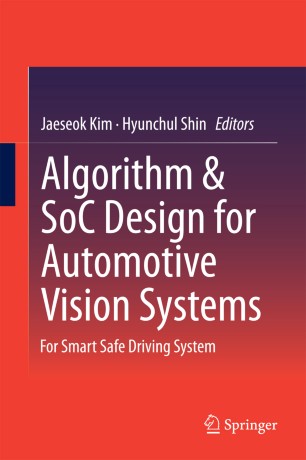 Although radar-based systems are primarily used for sensing the driving environments, the camera has gained importance in advanced driver assistance systems(ADAS).

This book covers system-on-a-chip (SoC) designs—including both algorithms and hardware—related with image sensing and object detection by using the camera for smart driving systems. It introduces a variety of algorithms such as lens correction, super resolution, image enhancement, and object detections from the images captured by low-cost vehicle camera. This is followed by implementation issues such as SoC architecture, hardware accelerator, software development environment, and reliability techniques for automobile vision systems.

This book is aimed for the new and practicing engineers in automotive and chip-design industries to provide some overall guidelines for the development of automotive vision systems.

It will also help graduate students understand and get started for the research work in this field.

Prof. Jaeseok Kim received B.S degree from Yonsei University in Korea, M.S degree from KAIST in Korea and Ph. D degree from RPI, USA in 1988. From 1988 to 1993, he was a member of technical staff at the AT&T Bell Lab., Murray Hill, NJ, USA. He is currently a professor of the electrical and electronic engineering department at Yonsei University, Seoul, Korea.

He was the best research achievement professor of year 2006 at Yonsei University and received the best brain award in Korea semiconductor technology area in 2005.

He has published more than a hundred refereed papers with five text books in electrical engineering area. He holds 45 patents and transferred 5 patents to ten companies.

Prof. Hyunchul Shin received B.S. degree and M.S. degree, from SNU and KAIST, respectively and Ph. D degree from U.C. Berkeley in 1987. He received Fulbright Scholarship. From 1987 to 1989, he was a member of technical staff at the AT&T Bell Lab., Murray Hill, NJ, USA. Since 1989, he has been a professor of the Department of Electronics Engineering at Hanyang University, Ansan, Korea. He has published more than a hundred technical papers and holds 15 patents. He worked as a Technical Adviser for several companies, including Samsung Electronics Co. and Atrenta. He served as General Chair of ISOCC 2007 and as Program Chair of ASP-DAC 2011. He is the president of IDEC Platform Center at Hanyang University. His research interests include SoC design, Computer Aided Design and Design and Synthesis of Integrated Systems for Vision and Image Processing applications.