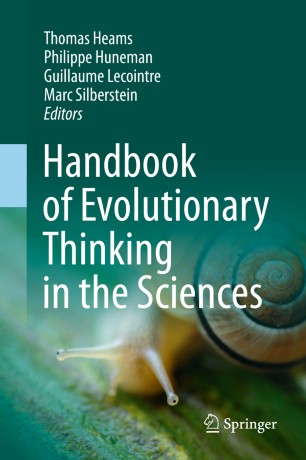 Handbook of Evolutionary Thinking in the Sciences

The Darwinian theory of evolution is itself evolving and this book presents the details of the core of modern Darwinism and its latest developmental directions. The authors present current scientific work addressing theoretical problems and challenges in four sections, beginning with the concepts of evolution theory, its processes of variation, heredity, selection, adaptation and function, and its patterns of character, species, descent and life.

The second part of this book scrutinizes Darwinism in the philosophy of science and its usefulness in understanding ecosystems, whilst the third section deals with its application in disciplines beyond the biological sciences, including evolutionary psychology and evolutionary economics, Darwinian morality and phylolinguistics. The final section addresses anti-Darwinism, the creationist view and issues around teaching evolution in secondary schools.

The reader learns how current experimental biology is opening important perspectives on the sources of variation, and thus of the very power of natural selection. This work examines numerous examples of the extension of the principle of natural selection and provides the opportunity to critically reflect on a rich theory, on the methodological rigour that presides in its extensions and exportations, and on the necessity to measure its advantages and also its limits.

Scholars interested in modern Darwinism and scientific research, its concepts, research programs and controversies will find this book an excellent read, and those considering how Darwinism might evolve, how it can apply to the human sciences and other disciplines beyond its origins will find it particularly valuable.

Originally produced in French (Les Mondes Darwiniens), the scope and usefulness of the book have led to the production of this English text, to reach a wider audience.

This book is a milestone in the impressive penetration by Francophone scholars into the world of Darwinian science, its historiography and philosophy over the last two decades...This English translation does indeed serve as a Handbook of Darwinian Thinking that will advance understanding of Darwinian theory in every language.

Until now this useful and comprehensive handbook has only been available to francophones. Thanks to this invaluable new translation, this collection of insightful and original essays can reach the global audience it deserves.

Thomas Heams, PhD, is Assistant Professor of Animal Genomics at AgroParisTech, Paris (Paris Institute of Technology for Life, Food and Environmental Sciences). His teaching and research interests are at the crossroads of Animal Sciences, Molecular Biology and the History of Scientific Ideas. He has coordinated several translations of books from English (American) and German to French. He is a member of the Editions Matériologiques editorial board.

Philippe Huneman, PhD, is Research Director at the Institut d’Histoire et de Philosophie des Sciences et des Techniques (CNRS / Université Paris I Sorbonne). He is a philosopher of biology, working mainly on issues about evolutionary biology. His main published papers are about: the variety of evolutionary explanations, causation and explanation in biology, the issue of individuality in biology and ecology, and the formal definitions of emergence, as well as the concept of organism and its role in current biology. This last topic relates to former work he has been extensively doing about Kantian views of biology with regard to prebiological conceptions of organisms. (Métaphysique et biologie. Kant et la constitution du concept d'organisme, Paris: Kimé, 2008). He also edited Functions: selection and mechanisms (Synthese Library, Dordrecht: Springer. 2012), with Frédéric Bouchard, From Groups to Individuals. (Cambridge : MIT Press, 2013) and with Denis Walsh, Challenges in Evolutionary Biology, to come out at Oxford University Press in 2014.

Guillaume Lecointre, PhD, is a research scientist, systematist, professor at Paris Museum (Muséum national d'Histoire naturelle) where he leads the research department of Systematics and Evolution. He's also involved in the improvement of the training of french teachers in systematics and evolutionary sciences. He published more than one hundred peer-reviewed papers and ten books (among them "The tree of life", with Hervé Le Guyader, Harvard Univ. Press).

“The Handbook is the most comprehensive volume to date in English on the metaphysics and epistemology of the life sciences. … The Handbook stands indeed also as a precious resource for teachers of Darwinian thinking, who can quite easily single out different chapters to update their view on evolution.” (Elena Casetta and Andrea Borghini, Acta Biotheoretica, Vol. 65, 2017)

“This volume provides a thorough overview of the ways in which evolutionary thought has expanded and extended to new fields, both within biology (developmental biology, molecular biology, systems biology, and synthetic biology) and beyond … . chapters give a clear and stimulating impression of the diversity and complexity of evolutionary thought, leaving ample room for philosophical and historical reflection. … Readers are provided with little incentive to obtain this book in print, rather than looking up its individual chapters online.” (Jeroen Hopster, The Quarterly Review of Biology, Vol. 91 (3), September, 2016)