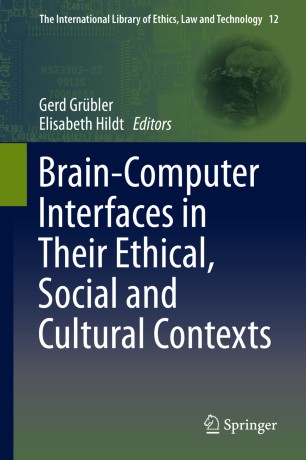 Brain-Computer-Interfaces in their ethical, social and cultural contexts

Part of the The International Library of Ethics, Law and Technology book series (ELTE, volume 12)

This volume summarizes the ethical, social and cultural contexts of interfacing brains and computers. It is intended for the interdisciplinary community of BCI stakeholders. Insofar, engineers, neuroscientists, psychologists, physicians, care-givers and also users and their relatives are concerned. For about the last twenty years brain-computer-interfaces (BCIs) have been investigated with increasing intensity and have in principle shown their potential to be useful tools in diagnostics, rehabilitation and assistive technology. The central promise of BCI technology is enabling severely impaired people in mobility, grasping, communication, and entertainment. Successful applications are for instance communication devices enabling locked-in patients in staying in contact with their environment, or prostheses enabling paralysed people in reaching and grasping. In addition to this, it serves as an introduction to the whole field of BCI for any interested reader. ​