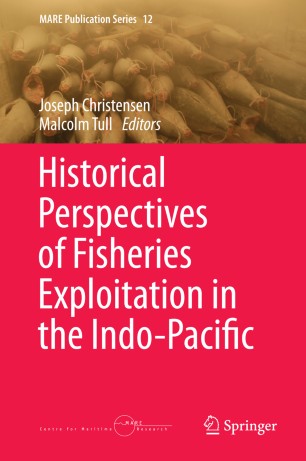 Historical Perspectives of Fisheries Exploitation in the Indo-Pacific

The waters of the Indo-Pacific were at the centre of the global expansion of marine capture fisheries in the twentieth century, yet surprisingly little has been written about this subject from a historical perspective. This book, the first major study of the history of fishing in Asia and Oceania, presents the case-studies completed through the History of Marine Animal Populations (HMAP) initiative. It examines the marine environmental history and historical marine ecology of the Indo-Pacific during a period that witnessed the dramatic escalation of industrial fishing in these seas.

Joseph Christensen is a postdoctoral fellow at the Asia Research Centre, Murdoch University. He is the author of a number of scholarly articles and chapters in the fields of environmental and maritime history, a leading contributor to the Historical Encyclopaedia of Western and a contributor to the centenary history of The University of Western Australia. As a postgraduate student, he was the inaugural recipient of the Frank Broeze Scholarship at The University of Western Australia. He teaches Australian and Southeast Asian history at the School of Arts, Murdoch University, and is a Fellow of Murdoch’s Centre for Fish, Fisheries and Aquatic Ecosystem Research. Malcolm Tull is a Professor of Economics at the School of Management and Governance, Murdoch University. He has a strong international record of publications in the disciplines of maritime economics and economic history. He was joint editor of the prestigious International Journal of Maritime History from 2000-2008, the author of A Community Enterprise: the History of the Port of Fremantle, 1897 to 1997 (1997), a Senior Editor for the Oxford Encyclopaedia of Maritime History (2007) and co-editor of Port Privatisation: The Asia-Pacific Experience (2008). A Fellow of Murdoch University’s Centre for Asian Studies since 1999, Malcolm was appointed Principal Investigator for the Asian History of Marine Animal Populations Project in 2006. In 2008 Malcolm was elected Vice-President of the International Maritime Economic History Association. He was formerly Dean of the Murdoch Business School (2008-12). He is a Fellow at Murdoch’s Centre for Fish, Fisheries, and Aquatic Ecosystem Research.