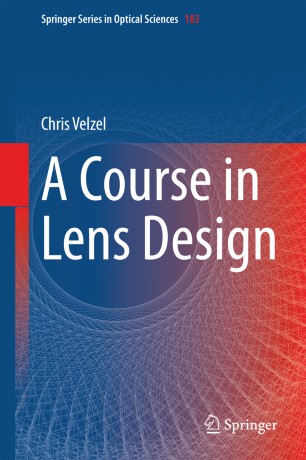 A Course in Lens Design

A Course in Lens Design is an instruction in the design of image-forming optical systems. It teaches how a satisfactory design can be obtained in a straightforward way. Theory is limited to a minimum, and used to support the practical design work. The book introduces geometrical optics, optical instruments and aberrations. It gives a description of the process of lens design and of the strategies used in this process. Half of its content is devoted to the design of sixteen types of lenses, described in detail from beginning to end.

This book is different from most other books on lens design because it stresses the importance of the initial phases of the design process: (paraxial) lay-out and (thin-lens) pre-design. The argument for this change of accent is that in these phases much information can be obtained about the properties of the lens to be designed. This information can be used in later phases of the design.

This makes A Course in Lens Design a useful self-study book, and a suitable basis for an introductory course in lens design. The mathematics mainly used is college algebra, in a few sections calculus is applied. The book could be used by students of engineering and technical physics, and by engineers and scientists.

The author studied technical physics at the Technical University of Delft, the Netherlands. He obtained a masters degree in 1965 with a thesis on the fabrication of lasers. After military service he found a position with Philips Electronics of Eindhoven, where he joined projects in holography, spectroscopy, optical recording and semiconductor laser research. He obtained a doctor’s degree from the University of Utrecht with a thesis on Fourier spectroscopy (1974).

In the second half of his Philips career (1982-1997) he was a consultant in industrial metrology.

Dr. Velzel left Philips in 1997 to join the company Nano Focus (Oberhausen, Germany), of which he is a co-founder. After seven years with Nano Focus, where he assisted in the development of confocal microscopes for surface characterisation, he started a new career as a teacher and consultant in optics, which he follows until the present day.

Dr. Velzel is co-author of the book “What Is Light”, with his teacher Prof. A.C.S. van Heel and of many other publications and patents. He served on the International Commission for Optics as a vice-president (for industry) from 1986-1992.