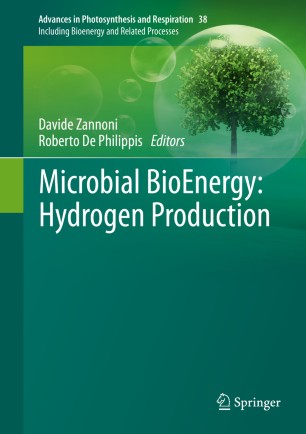 Part of the Advances in Photosynthesis and Respiration book series (AIPH, volume 38)

Solar energy is the source of most of the living organisms on Earth so that the overall efficiency of oxygenic and/or non-oxygenic photosynthesis, when used to generate biomass, bioenergy and biofuels, is a critical point to be considered. This volume in the Advances in Photosynthesis and Respiration series, however, not only provides a comprehensive view of the current understanding of the photosynthetic mechanisms linked to bio-hydrogen production but also extends this view to the anaerobic-dark processes involved in transforming the solar-generated biomass into biogas along with a deep coverage of both structural and functional aspects of the main enzymes involved, such as nitrogenases and hydrogenases. The fifteen chapters of this book offer a broad coverage of this emerging research field and, it is hoped, will be accessible to most advanced undergraduates, graduate students, PhD students and researchers looking to broaden their knowledge on the photosynthetic and fermentation processes applied to hydrogen gas generation. For biologists, biochemists, biophysicists and microbiologists, this volume will provide a solid and quick starting base to get into biotechnological problems of “ microbial bioenergy”. This volume will also be of interest to advanced undergraduates in chemical engineering and biotechnology teachers wanting a single reference book on the latest understanding of the critical aspects of microbial bioenergy production. This volume is dedicated to both Hans Gaffron (1902-1979), who discovered H2-production by green algae under sulfur starvation in 1942, and Howard Gest (1921-2012), who first described H2-production by purple non-photosynthetic bacteria in 1949.

Davide Zannoni, Professor of General Microbiology, received the doctoral degree in Biological Sciences, in 1973, from the University of Bologna, Italy; his thesis was on the Bioenergetics of the facultative photosynthetic bacterium Rhodobacter (Rb.) capsulatus. During 1977-1978, he was a research fellow of the North Atlantic Treaty Organization (NATO) at the St. Louis Medical School, Department of Biochemistry, St. Louis MO, USA, under the supervision of Professor Barry L. Marrs. In 1979, he was appointed Lecturer in Plant Biochemistry and in 1981, he was promoted to become Associate Professor of Plant Biochemistry, at the Faculty of Sciences, University of Bologna. As a research fellow of the European Molecular Biology Organization (EMBO) in 1981, 1983 and 1991, he visited several European laboratories, namely: Department of Biochemistry and Microbiology, St. Andrews University, St. Andrews Scotland U.K.; Département de Biologie Cellulaire et Moléculaire, Centre National Recherche Scientifique (CNRS), Commissariat à l'Energie Atomique (CEA) Saclay Gif-sur-Yvette, France; Department of Microbiology, University of Göttingen, Göttingen Germany, to investigate both the structure and the function of membrane redox-complexes in a variety of microbial genera. Zannoni’s scientific interests now include bioenergetics and genomics of microbial remediation of metals and metalloids in planktonic cells and biofilms of Rb. capsulatus and Pseudomonas pseudoalcaligenes, molecular mechanisms of bacterial movement (chemo- and photo-taxis) and biofilm formation, alkane and naphthenic acid degradation by Rhodococcus spp., the use of microbial biofilms as electricity-producing systems and finally, bio-hydrogen anaerobic production by Thermotoga. Zannoni’s pioneering work on hydrogen metabolism in Rb. capsulatus began in 1981 (European Community Solar Energy Research &Development). He is author and/or co-author of more than 130 publications in international research journals and he has published several research as well as text-books for students. From 2004 to 2010, Prof. Zannoni has been the Head of the Department of Biology of the University of Bologna. He is presently acting as a Coordinator of the Master’s degree in Molecular & Industrial Biotechnology at the Department of Pharmacy & Bio-Technology, University of Bologna – Alma Mater Studiorum, Italy. See his web site for further information.

Roberto De Philippis, Associate Professor of Microbial Biotechnology, received his Laurea degree in Chemistry from the University of Florence, Italy, in 1978; his thesis was on the chemical interactions between nucleic acids and amino acids as studied by means of NMR and EPR techniques. During 1978-1981, he was a research scientist at the Research Center on Plastic Polymers at “Montedison” SpA, Milan, Italy; during 1981-1983 he was responsible for the scientific and technical aspects of Baker’s yeast production at a Food Industry in Florence. During 1984-1990, he was a Research Fellow at the Institute of Agricultural and Technical Microbiology, University of Florence. During 1990-2001, he served as a Lecturer at the Department of Food and Microbiological Science and Technology, University of Florence. From 2001 he has been an Associate Professor of Microbial Biotechnology at the University of Florence, Department of Agrifood Production and Environmental Sciences. He is at the same time, an Associate Researcher at the Institute of Chemistry of Organometallic Compounds, Italian National Research Council (ICCOM-CNR), Florence. His research activity is mainly concerned with the physiology and biochemistry of photosynthetic bacteria. In particular, Roberto is studying the physiology and the possible biotechnological exploitation of phototrophic microorganisms in the production of biopolymers of industrial interest or in processes related to the production of energy from renewable resources or for the treatment of polluted waters. He is also involved in studies on the formation of phototrophic biofilms on monuments or in the stabilization of desert soils by the use of phototrophic microorganisms. He has been hosted for his research by several Institutions in China, India, Israel, Mexico, Portugal and in USA. He has published more than 80 scientific papers in international peer reviewed journals, ten chapters in books, and has participated in more than 90 international and national Congresses. During 1999-2001, Roberto was Secretary/Treasurer and currently, he is President- elect of the International Society for Applied Phycology. He is an Assistant Editor of the Journal of Applied Phycology. From 2010, he has been a Delegate for Italy in the IEA-HIA (International Energy Agency- Hydrogen Implementing Agreement) New Annex 21 “Bio-inspired and Biological Hydrogen.

“The current volume has 15 chapters written by 42 authors almost exclusively from Europe and North America … . I also recommend that this book be acquired by all the laboratories engaged in biohydrogen research, as well as by all universities and research institutes with advanced undergraduates, graduate students, and postdoctoral fellows in Plant Biology, Plant Sciences, Molecular Biology, Biochemistry, Biophysics, Bioengineering, and Biotechnology.” (Michael Seibert, Photosynthesis Research, Vol. 127, 2016)