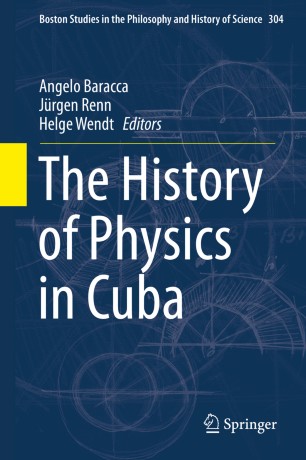 The History of Physics in Cuba

Part of the Boston Studies in the Philosophy and History of Science book series (BSPS, volume 304)

This book brings together a broad spectrum of authors, both from inside and from outside Cuba, who describe the development of Cuba's scientific system from the colonial period to the present. It is a unique documentation of the self-organizing power of a local scientific community engaged in scientific research on an international level. The first part includes several contributions that reconstruct the different stages of the history of physics in Cuba, from its beginnings in the late colonial era to the present. The second part comprises testimonies of Cuban physicists, who offer lively insights from the perspective of the actors themselves. The third part presents a series of testimonies by foreign physicists, some of whom were directly involved in developing Cuban physics, in particular in the development of teaching and research activities in the early years of the Escuela de Física. The fourth part of the volume deals with some of the issues surrounding the publishing of scientific research in Cuba.

Cuba’s recent history and current situation are very controversial issues. Little is known about the development and status of higher education and scientific research on the island. However, Cuba has one of the highest proportions in the world of people with a university degree or doctorate and is known for its highly developed medical system. This book focuses on a comprehensive overview of the history of the development of one specific scientific discipline: physics in Cuba. It traces the evolution of an advanced research system in a developing country and shows a striking capacity to link the development of modern research with the concrete needs of the country and its population. A little known aspect is the active participation of several “western” physicists and technicians during the 1960s, the role of summer schools, organized by French, Italian, and other western physicists, as well as the active collaboration with European universities.<

“The History of Physics in Cuba adds to our understanding of the development of contemporary physics in specific, if not unique, political circumstances. It offers valuable information and personal insights. … it relates to current debates concerning international relations, access to scientific knowledge, and the material and social conditions for advanced physical research. … Cuba will pose a fascinating case to those interested in the social and political relations of science in the first half of the twenty-first century.” (Xavier Roqué, Isis, Vol. 107 (2), June, 2016)