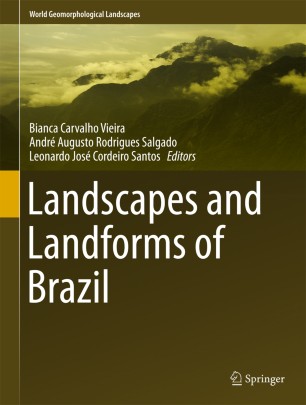 Landscapes and Landforms of Brazil

This book presents Brazil as a country of continental dimensions. Its territory has a large variety of rock types, geological structures and climates. The country has a large variety of landscapes, such as the humid plains of the Amazon River, the dry plateaus of the semi-arid region or the subtropical mountains of the southern region. On the coast, some plateaus and mountains, like the Serra do Mar Mountain range, formed a significant barrier front to access the hinterland of Brazil. On the other side of these coastal plateaus and mountains, there is a large collection of other plateaus, mountains, plains and depressions little altered by human interference. Thus, Brazil has a unique variety of different landscapes and extraordinary geomorphological sites. The book invites readers to learn more about the beautiful Brazilian landscapes, their complexity and vastness.

Bianca Carvalho Vieira is Bachelor in Geography and M.Sc. (Geography) from the Federal University of Rio de Janeiro (Brazil). As of 2005, she is professor at the Department of Geography at the University of São Paulo (USP) in Brazil. She teaches courses on Geomorphology (Graduation) and Mass Movement: concepts, conditioning factors and preview methods (Post-Graduation). She has PhD in Geography (Federal University of Rio de Janeiro) on predicting shallow landslides in Serra do Mar (SP) from physically based models. From 2002–2003, she was researcher on the Instituto de Pesquisas Tecnológicas do Estado de São Paulo (IPT) and worked with landslides diagnosis and prediction on the urban areas and mapping of risk areas in the São Paulo city. She is Member of the Executive Committee of Brazilian Geomorphological Union (UGB) as of 2004. From 2003–2005, she was Professor at the Department of Geography - State University of São Paulo (UNESP). Her main research interests are methods are currently used in the spatial and temporal prediction of shallow landslides in a basin scale, analysis of the role of the topography in the distribution of erosive forms and identification risk areas of landslides and floods in urban areas.

André Augusto Rodrigues Salgado is a Bachelor in Geography and a M.Sc. in Geography (Federal University of Minas Gerais), is a Doctorate in Crustal Evolution and Natural Resources (Federal University of Ouro Preto) and doctorate in Geosciences (Universite d'Aix-Marseille III). He is currently Adjunct Professor at the Federal University of Minas Gerais. He has experience in Geosciences, with emphasis on geomorphology and his research interests are in regional evolution of the topography and measurement of erosion in the long term. Since 2009 works as a consultant in the evaluation of ad hoc scientific merit of research projects in Geomorphology that require financing from the National Science Fondation (NSF) - funder of scientific research agency of the US Government. Currently vice-president of the Brazilian Geomorphology Union (UGB) and Sub-Program Coordinator of Graduate Studies in Geography (M/D) of UFMG.