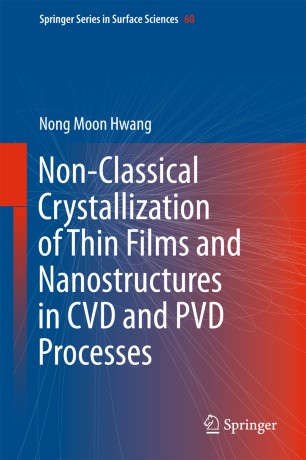 This book provides a comprehensive introduction to a recently-developed approach to the growth mechanism of thin films and nanostructures via chemical vapour deposition (CVD). Starting from the underlying principles of the low pressure synthesis of diamond films, it is shown that diamond growth occurs not by individual atoms but by charged nanoparticles. This newly-discovered growth mechanism turns out to be general to many CVD and some physical vapor deposition (PVD) processes. This non-classical crystallization is a new paradigm of crystal growth, with active research taking place on growth in solution, especially in biomineralization processes.
Established understanding of the growth of thin films and nanostructures is based around processes involving individual atoms or molecules. According to the author’s research over the last two decades, however, the generation of charged gas phase nuclei is shown to be the rule rather than the exception in the CVD process, and charged gas phase nuclei are actively involved in the growth of films or nanostructures. This new understanding is called the theory of charged nanoparticles (TCN). This book describes how the non-classical crystallization mechanism can be applied to the growth of thin films and nanostructures in gas phase synthesis.
Based on the author’s graduate lecture course, the book is aimed at senior undergraduate and graduate students and researchers in the field of thin film and nanostructure growth or crystal growth. It is hoped that a new understanding of the growth processes of thin films and nanostructures will reduce trial-and-error in research and in industrial fabrication processes.

Prof. Hwang’s research interest is in the microstructure evolutions during material processing, especially, abnormal grain growth and thin film growth. The topics are approached both experimentally and theoretically, occasionally using computer simulation. The most focused work has been the theory of charged clusters, which is suggested as a new understanding of thin film growth. This topic is related to the growth mechanism of thin films and nanowires, nanotubes prepared by chemical vapor deposition. The size distribution of charged clusters or nanoparticles is measured by differential mobility analyzer (DMA). He published more than 100 papers in SCI-indexed journals