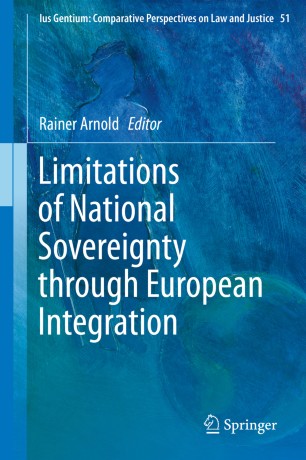 The book considers the changes which national sovereignty has undergone through the supranational European integration. In various contributions by renowned academics and high judges demonstrate the serious impacts of supranationality on the EU member states and even on third countries which are connected with the EU by international treaties. It becomes clear that primacy of EU law, the most significant expression of supra-nationality, collides with national sovereignty as anchored in the national constitutions. The studies clearly show that most member states do not fully deny EU law primacy but are aware of the need to find an adequate balance between the supranational and the national orders. The result from the analyses of the authors from various European countries is that the upcoming constitutional paradigm is “constitutional identity”, a concept established by jurisprudence in Germany, France, Czech Republic (without being named so) and debated also in Poland which, herself, denies supranational impact on the national Constitution entirely.

Studies on selected EU member states clarify the specific national approaches towards the limitations of their sovereignty as developed by the constitutional jurisprudence (Poland, Czech Republic, Hungary, Romania, Italy, Germany with comparative references to United Kingdom and France). It is illuminated that traditionally strong sovereignty concepts (UK, France) are considerably relativized and functionally opened towards the integration challenges. Basic issues are furthermore reflected, such as the supranational impact on the State’s power to reform its Constitution, the relation of national and constitutional identity and the national and supranational perspectives of identity. The book also includes Europe beyond the EU by research on the supranational character of association treaties (from a Ukrainian perspective) and on the Europeanization of a third country preparing EU membership (Albania).