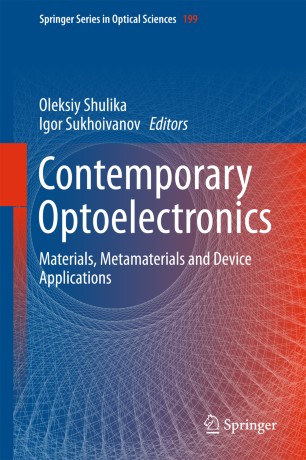 The book contains both experimental and theoretical studies, and each contribution is a self-contained exposition of a particular topic, featuring an extensive reference list.  The book will be a useful resource for graduate and postgraduate students, researchers and engineers involved in optoelectronics/photonics, quantum electronics, optics, and adjacent areas of science and technology.

Igor A. Sukhoivanov had received the Ph.D. degree in 1985, the Dr. Sc. degree in Optics and Laser Physics from V. N. Karazin National University, Kharkiv, Ukraine in 2002, and Full Professor degree in 2004. Currently he is with the Guanajuato University, Dept. Electronics, DICIS, Salamanca, Mexico, Professor Titular B., Member SNI, level II.
He is the author/coauthor of 9 book chapters and more than 130 journal papers. He is coauthor of 1 book “Photonic Crystals: Physics and Practical Modeling”Springer©2009
His research interests include photonic devices, semiconductor lasers and theory of quantum confinement structures, photonic crystal elements, ultra short pulse propagation in fibers.
Prof. Sukhoivanov is a Senior Member of the IEEE Photonics Society (IPS), and of the Opt. Society of America (OSA), member of the American Phys. Soc. (APS), and the Soc. of Photo-Optical Instrumentation Engineers (SPIE). He is Organizer

and Chairman of Int. Conference on Advanced Optoelectronics and Lasers (CAOL), Int. Conference on Laser and Fiber Optical Networks Modeling, etc. He is also Co-organizer of separate topics in LEOS Summer Topicals’2008 and PHO Summer Tropicals’2010 in Mexico.