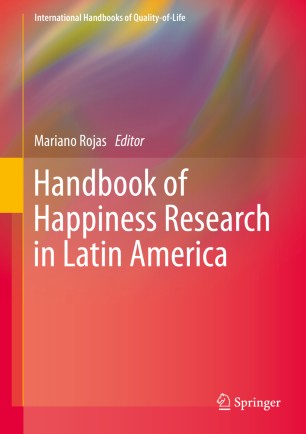 This handbook presents original happiness research from and about a region that shows unexpectedly high levels of happiness. Even when Latin American countries cannot be classified as high-income countries their population do enjoy, on average, high happiness levels. The handbook draws attention to some important factors that contribute to the happiness of people, such as: relational values, human relations, solidarity networks, the role of the family, and the availability and gratifying using of leisure time. In a world where happiness is acquiring greater relevance as a final social and personal aim both the academic community and the social-actors and policy-makers community would benefit from Happiness Research in Latin America.

Mariano Rojas is Professor of Economics at Facultad Latinoamericana de Ciencias Sociales, Sede México and at Universidad Popular Autónoma del Estado de Puebla. He got his undergraduate degree in economics from Universidad de Costa Rica and his M.A. and Ph.D degrees in economics from The Ohio State University, United States. His areas of research are: Happiness, Subjective Well-Being, Quality of Life, Economic Development, and Applied Microeconomics. He has been a member of ISQOLS since 2000, and performed as vice-president of finance from 2007 to 2008 and as vice-president of external affairs from 2011 to 2012. In 2009 he was awarded ISQOLS’ Research Fellow Award as well as JOHS’ Outstanding Reviewer Award. Mariano Rojas coordinates the Mexican Initiative Measuring the Progress of Societies: A Perspective from Mexico. This initiative received the Best New Initiative Award by OECD Global Project on Measuring the Progress of Societies in 2009 at the Busan, Korea 3rd World Forum.

“This Handbook is truly a comprehensive compilation of stand-alone chapters that cover multidisciplinary well-being research in Latin America, including original research and a few overall summaries and consideration of the implications of the data. … it is intended for academics from various disciplines interested in Latin America or focused on international comparisons. … the Handbook is comprehensive, exhaustive, and designed to promote international knowledge and collaboration. It is an indispensable addition to the library of any researcher in the field.” (Alejandra Suarez, PsycCRITIQUES, Vol. 61 (15), April, 2016)