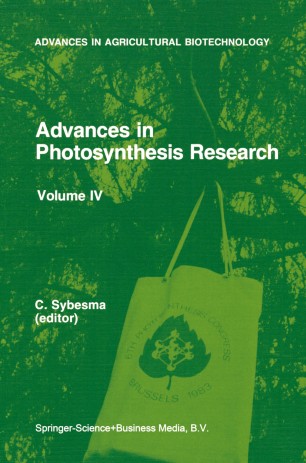 The Sixth International Congress on Photosynthesis took place from 1 to 6 August 1983, on the Campus of the "Vrije Universiteit Brussel", in Brussels, Belgium. These Proceedings contain most of the scientific contributions offered during the Congress. The Brussels Congress was the largest thus far held in the series of International Congresses on Photosynthesis. It counted over 1100 active participants. The organizers tried to minimize the disadvantages of such a large size by making maximum use of the facili­ ties available on a university campus. Most contributions were offered in the form of posters which were displayed in a substantial number of classrooms. The discussion sessions, twice a day, four or five in parallel, took place in lecture rooms in the very vicinity of these classrooms. In this way it was attempted to generate the atmosphere of a small meeting. The unity of the subject Photosynthesis was preserved in the ten plenary lectures, organ~sed in such a way that a general overview of two diverse topics was given every day. In addition, there were the five times four parallel symposia dealing with some six­ teen general topics. Every editor of proceedings of a congress is faced with the problem of editing and arranging the contributions, a problem compounded by the wide diversity and the large number of the 753 manuscripts.