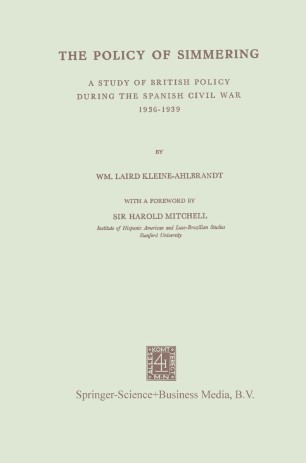 Few modem events have aroused more controversy than the Spanish Civil War. This controversy was especially acute in Great Britain, which was tom between its distrust of Nazi Germany and Fascist Italy on the one hand and of Communist Russia on the other. The and determined to avoid war at British public, pacifist in sentiment almost any cost, sensed the danger implicit in the Civil War, yet realised its impotence to control events in Spain which indeed it little understood. The British Government, though under heavy attack from the Opposition and from a handful of its own supporters, succeeded in its endeavours to keep the country out of war on this occasion. The neutrality of Spain, even after Mussolini had entered World War II, was of inestimable value to Britain after the debacle in the summer of I940. It may be therefore that British policy during the Civil War paid off later on as well as achieving its purpose at the time. Dr. Kleine's book, lucidly written and carefully documented, ex­ amines the British attitude toward the Spanish Civil War. The author has the advantage of belonging to a generation which is able to analyse these events with historical detachment. Yet his understanding and easy style have made the period live. Neutrality was not easy for Britain. Its far-reaching interests in trading with Spain and in passage through Iberian waters again and again raised awkward problems.