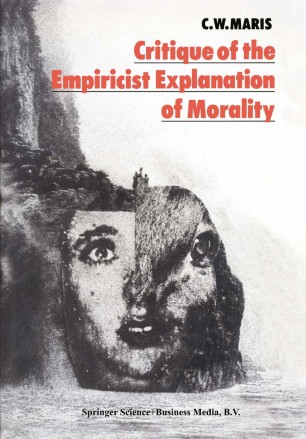 Critique of the Empiricist Explanation of Morality

Is there a Natural Equivalent of Categorical Morality?

a. 'Two things fill the mind with ever new and increasing admiration and awe, the oftener and the more steadily we reflect on them: the starry heavens above and the moral law within. ' Thus Kant formulates his attitude to morality (Critique of Practical Reason, p. 260). He draws a sharp distinction between these two objects of admiration. The starry sky, he writes, represents my relationship to the natural, empirical world. Moral law, on the other hand, is of a completely different order. It ' . . . begins from my invisible self, my personality, and exhibits me in a world which has true infinity, but which is traceable only by the understanding and with which I discern that I am not in a merely contingent but in a universal and necessary connection (. . . ). ' (p. 260). So Kant sees morality as a separate metaphysical order opposed to the world of empirical phenomena. Human beings belong to both worlds. According to Kant, the personality derives nothing of value from its relationship with the empirical world. His part in the sensuous world of nature places man on a level with any animal which before long must give back to the rest of nature the substances of which it is made.