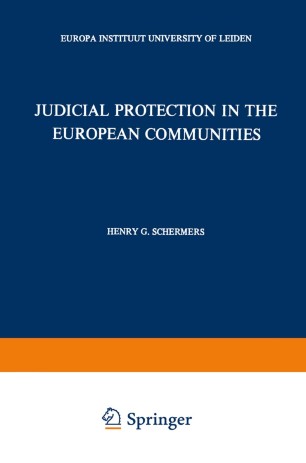 Judicial Protection in the European Communities

I. Purpose of the book § 1. The Court of Justice plays a significant role in the development of the European Communities, to some extent comparable with the role of the Supreme Court in the early years of the United States of America. Both are constitutional courts charged with the preservation and the development of the law in a new society. The powers of both are in fact limited by the 1 existing political situation. Each court plays a vital role in the protection of the individual against a vast and increasingly influential administration. In the present book the attempt is made to describe the nature of the ju­ dicial protection within the sphere of European Community law, that is available to individuals and undertakings as well as to the Member States. The study is heavily based on the case-law of the Court of Justice, which in principle is described rather than criticized, mainly for three reasons. (I) The author has great admiration for the Court of Justice and for the manner in which it operates. He considers that a detailed description of the Court's case-law portrays a fine legal system that is not susceptible to a great amount of fundamental criticism.