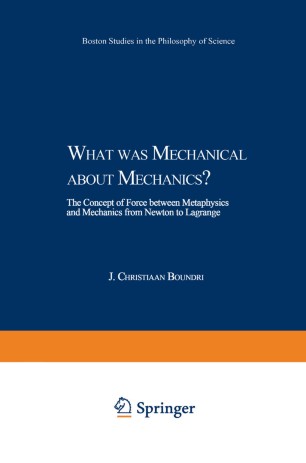 What was Mechanical about Mechanics

Part of the Boston Studies in the Philosophy of Science book series (BSPS, volume 224)

The Age of Reason is left the Dark Ages of the history of mechanics. Clifford A. Truesdell) 1. 1 THE INVISIBLE TRUTH OF CLASSICAL PHYSICS There are some questions that physics since the days of Newton simply cannot an­ swer. Perhaps the most important of these can be categorized as 'questions of eth­ ics', and 'questions of ultimate meaning'. The question of humanity's place in the cosmos and in nature is pre-eminently a philosophical and religious one, and physics seems to have little to contribute to answering it. Although physics claims to have made very fundamental discoveries about the cosmos and nature, its concern is with the coherence and order of material phenomena rather than with questions of mean­ ing. Now and then thinkers such as Stephen Hawking or Fritjof Capra emerge, who appear to claim that a total world-view can be derived from physics. Generally, however, such authors do not actually make any great effort to make good on their claim to completeness: their answers to questions of meaning often pale in compari­ 2 son with their answers to conventional questions in physics. Moreover, to the extent that they do attempt to answer questions of meaning, it is easy to show that they 3 draw on assumptions from outside physics.

J. Christian Boudri studied mechanical engineering at the University of Twente. From 1988 to 1994 he worked in the field of the history of science at the same university, under the supervision of H. Floris Cohen and C. Hakfoort. The present book is the result of that period. Since 1995, Boudri's professional activity has been in the field of energy technology.