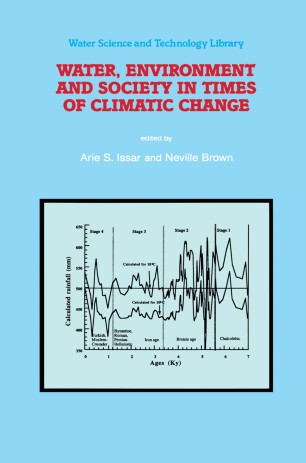 Water, Environment and Society in Times of Climatic Change

Contributions from an International Workshop within the framework of International Hydrological Program (IHP) UNESCO, held at Ben-Gurion University, Sede Boker, Israel from 7–12 July 1996

Since the greenhouse effect emerged as a predictable threat, necessitating the evalu­ ation of its future impact on the environment in the various parts of the globe, interest in the climate changes during the Holocene has gained momentum. The background can be summarized by the sentence: The past is a key to the future. As a matter of fact, this sentence is in the opposite direction, on the dimension of time, to the principle adopted by the founders of the science of geology. They proposed that geological processes in the present should be used as a key for understanding the past. Another reason for the interest in the history of the climate of the Holocene can be described as the renaissance of a modified deterministic approach to the inter­ relation between physical and human geography. This relates in the first place to the fact that various investigations, especially as carried out by Hubert Lamb, showed that the sequence of climate changes previously suggested by Blytt and Sernander for Europe and adopted by most Holocene climatologists was far too general, and that there were more climate changes during recent history than previously taken account of. In the second place it was found out that these changes had had an impact on the history of human communities. Thus, one can conclude that once the taboo on geographical determinism (i. e.