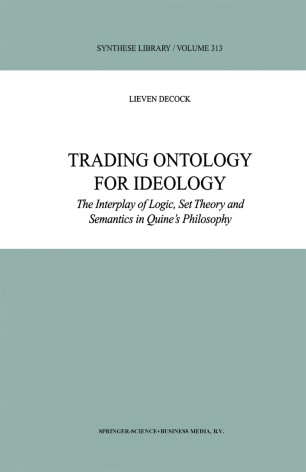 The Interplay of Logic, Set Theory and Semantics in Quine’s Philosophy

Willard VanOrman Quine has probably been the most influential th American philosopher of the 20 century. His work spans over seven decades, and covers many domains in philosophy. He has made major contributions to the fields of logic and set theory, philosophy of logic and mathematics, philosophy of language, philosophy of science, epistemology and metaphysics. Quine's first work in philosophy was in the field of logic. His major contributions are the two set-theoretic systems NF (1936) and ML (1940). 1 These systems were alternatives to the type theory of Principia Mathematica or Zermelo's set theory, and are still being studied by 2 mathematicians. An indirect contribution to the field of logic is his strong resistance to moda110gic. Quine's objectIons to the notions of necessity and analyticity have influenced the development of moda110gic? Quine has had an enormous influence on philosophy of mathematics. When Quine entered philosophy there was a discussion on the foundations of mathematics between the schools of intuitionism, formalism, and conventionalism. Quine soon took issue with Carnap's conventionalism in "Truth by convention,,4 (1936). Quine has never joined one of the other schools, but has added new elements that are the basic ones of the 5 contemporary schools of nominalism, platonism, and structuralism. Quine has long been in the shadow of Benacerraf and Putnam in this field. At the moment there seems to be a renewed interest in Quine's work, and most philosophers explicitly refer to Quine's work.