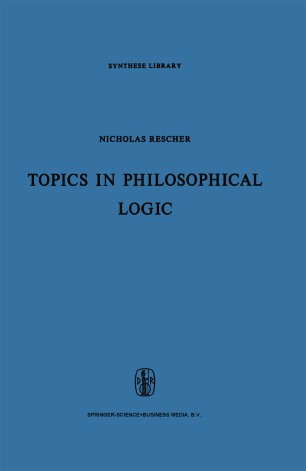 The aim of the book is to introduce the reader to some new areas oflogic which have yet to find their way into the bulk of modern logic books written from the more orthodox direction of the mainstream of develop­ ments. Such a work seems to me much needed, both because of the in­ trinsic value and increasing prominence of the nonstandard sector of logic, and because this particular sector is of the greatest interest from the standpoint of philosophical implications and applications. This book unites a series of studies in philosophical logic, drawing for the most part on material which I have contributed to the journal liter­ ature of the subject over the past ten years. Despite the fact that some of these essays have been published in various journals at different times, they possess a high degree of thematic and methodological unity. All of these studies deal with material of substantial current interest in philo­ sophical logic and embody a fusion of the modern techniques of logical and linguistic-philosophical analysis for the exploration of areas of logic that are of substantial philosophical relevance.