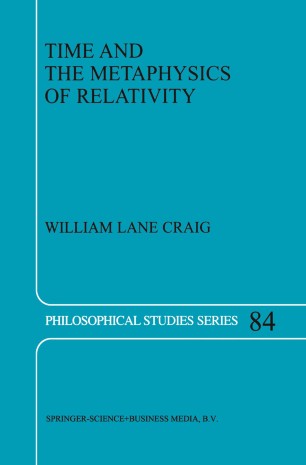 Time and the Metaphysics of Relativity

he present volume is part of a larger project, which is the attempt to draft a T coherent doctrine of divine eternity and God's relationship to time. In my God, l Time, and Eternity, I argued that whether one construes divine eternity in terms of timelessness or of omnitemporality will depend'''crucially upon one's views about the objectivity of tensed facts and temporal becoming. If one adopts a tensed, or in McTaggart's terminology, an A-Theory of time, then a coherent doctrine of divine eternity requires that one construe God, at least since the moment of creation, to exist temporally, which implies that divine timelessness can be successfully maintained only if a tenseless or B-Theory of time is correct. Accordingly in my companion volumes The Tensed Theory of Time: a Critical Examination and The Tenseless Theory of Time: a Critical Examination I set for myself. the task of 2 adjudicating the A- vs. B-Theory of time. In the former volume; r examine arguments for and against the A-Theory of time, and in the latter l' tum to an examination of arguments for and against the B-Theory. This inquiry tookme into a study of relativity theory,. its presuppositions and implications. The paucity of integrative literature dealing with the concept of. God and· relativity theory is striking.